‘Iliad’ performer to take on 26 parts in Lawrence show 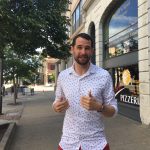 Becoming 26 different characters during a solo performance would overwhelm many actors, but Daniel Bird Tobin has it down by now.

Having performed the play “An Iliad” over the past six years around the U.S. and in England, Tobin, 29, has come to know all the characters and has locked them in his mind. That intimacy has helped him navigate the production, which evolves with every performance.

“An Iliad” is a modern adaptation of Homer’s ancient Greek epic, which recounts significant events of the Trojan War and the Greek siege of the city of Troy. As the storyteller, Tobin takes on the roles of men, women, gods and goddesses.

Tobin arrived in Lawrence June 30 to be the guest director for the Summer Youth Theatre production of “The Odyssey.” He will offer a one-time performance of “An Iliad,” written by Lisa Peterson and Denis O’Hare, at 3 p.m. Sunday at the Lawrence Arts Center, 940 New Hampshire St. The performance is recommended for ages 13 and over because of strong language and violence. A $5 donation is suggested at the door.

While large chunks of the performance are pulled from a translation of the “Iliad” by the two playwrights, Tobin said a small bit of ancient Greek makes it into the production.

“It’s not enough to scare anyone away, but enough to give it flavor,” Tobin said.

The show begins with the lone figure of Tobin on the stage, saying the famous opening lines in ancient Greek, which he then translates as “Rage — Goddess, sing the rage of Peleus’ son Achilles.”

“It helps lay the groundwork and frames the piece,” Tobin said.

Tobin just completed a post-Master of Fine Arts fellowship at Virginia Tech in Blacksburg, Va. He has an MFA from Arizona State University, which is where he met Amanda Pintore, the Lawrence Arts Center’s associate director for performing arts and education. The two have collaborated on multiple projects over the years. Pintore just returned from directing Tobin in a solo showpiece in Blacksburg. Last year he came to Lawrence to direct the Summer Youth Theatre production of “Robin Hood.”

“We brought him back because he’s fantastic,” Pintore said. “We value him as a collaborator and someone who works with young people.”

While the core of the production of “An Iliad” is about rage, anger and fury, over the years, Tobin has been able to find the joy and humor in the play, which has allowed him to continue doing the piece; otherwise, he said, it would be too depressing. The light moments, even if fleeting, also help him deepen the connection with the audience.

Lawrence resident Stanley Lombardo, a former professor of classics at the University of Kansas who has published renowned translations of both the “Iliad” and the “Odyssey,” noted that the tradition of the “Iliad” dates back 2,800 years.

“It is meant to be a solo performance,” Lombardo said.

Lombardo has performed his translations around the country, including at the Smithsonian Institution, in Washington, D.C.

He has heard different solo productions of the epic, including “An Iliad.”

“The ones I have heard have been tremendously talented,” Lombardo said. “The actors are incredible, taking on all the different voices.”

For his own performances, Lombardo always does five or six characters. He changes his voice, posture and expression to reflect the different characters.

The “Iliad” parts Lombardo likes to do most are during the funeral of Hector, the son of the Trojan king who was slain by Achilles. Hector’s family members all lament over his body with differing perspectives.

For Tobin, the best performances come when he realizes he has changed since the last show and has something new to offer. Different parts of the play resonate with him at different times.

On stage with only a table, chair and a shoulder bag to hold his water, Tobin knows the story well.