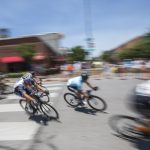 In this file photo from June 28, 2015, cyclists competing in the men's pro race speed around a corner during the Tour of Lawrence downtown criterium.

The Tour of Lawrence will once again bring cyclists to the streets of downtown Lawrence, turning the city’s sidewalks and street corners into prime viewing spots to see top-level cyclists compete in the four-day tour.

After a hiatus, the Tour of Lawrence is bringing back its signature downtown race, which will kick off the omnium tour, where cyclists rack up points at each event as they compete for overall tour champion. The downtown criterium race, called the Firecracker Crit, will take place on July 4 and takes riders around downtown on a figure-eight course.

Local cycling group Women’s Free State Racing is organizing the tour for the second time this year. Race organizers say they are excited to bring back the downtown race after the tour was denied a permit last year.

“I really am excited to be back downtown, because I think that it is such a spectator-friendly course,” said race director Cindy Bracker. “I think that it makes it really great for both the racers and the community, to see some amazing racing.”

Last year, Downtown Lawrence Inc. objected to the street closures requested for the race, citing closures’ negative impact on sales, and city leaders subsequently denied the tour’s street event permit. However, Bracker said multiple downtown business owners reached out to her expressing support for the race, and they suggested the tour’s downtown event take place on July 4 when many stores are closed anyway.

The tour includes races for men’s and women’s professional, amateur and youth categories, and Bracker said they expect between 300 and 350 cyclists to participate this year. She said the amateur-level races will be open to beginners, even those who have never competed before.

The downtown race will also include a kids zone with activities such as face painting and crafts at the corner of Ninth and Massachusetts streets. Directly following the downtown race, residents can also participate in a bike parade. The parade will lead to the Lawrence Go Fourth celebration at Burcham Park, which includes live music and fireworks.

The other three races in the tour will take place Friday through Sunday, and they’ll comprise a 10K time trial on the old 59 Highway, a criterium at Haskell Indian Nations University and a criterium at East Hills Business Park. The Haskell event will also include races for kids. Originally, the final event was scheduled to be a “Cobble Crit” that included brick roads in the East Lawrence arts district, but Bracker said that rainy weather resulted in city street construction delays in the district, forcing the tour to make a course change because construction was not completed when expected.

Racers will compete for thousands of dollars in prize money, as well as gift certificates, merchandise and medals. Bracker said riders must complete each event in order to compete for the overall prize, and registration for the complete omnium will close Tuesday. However, cyclists can still register individually for races the day of the race, with the exception of the time trial race.

More information about the Tour of Lawrence, including race times, is available on the Women’s Free State Racing’s website, womensfreestateracing.com. Bracker said the tour is still looking for volunteers, and both volunteers and racers can register on the website.