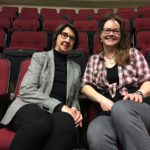 Young people with special needs will be singing, dancing and acting in a summer production of Disney’s “Aladdin Jr.,” thanks to a new program at Theatre Lawrence.

“The key part of Penguin Project is not only having kids with special needs but having a mentor about the same age,” said Hailey Gillespie, youth education director with Theatre Lawrence. The peer mentors help with every aspect of performance.

“Mentors act as facilitators so the kids with special needs can really shine,” said Mary Doveton, the theater’s executive director.

Participants do not have to audition for parts, and Gillespie said the program could accommodate a cast of 45.

The Penguin Project was established in 2004 by Andrew Morgan, a professor emeritus of clinical pediatrics and former head of the division of child development at the University of Illinois College of Medicine in Peoria, Ill.

Morgan found that his special-needs patients and their families often felt isolated, with limited opportunities to engage in community activities, according to the Penguin Project handbook, and he realized that participation in the performing arts enhanced socialization, communication skills and self-esteem.

The “Aladdin Jr.” production at Theatre Lawrence will be comprehensive and include a choreographer and a music director.

“This is truly meant to be adapted so kids can discover and develop their talents,” said Gillespie, who is the director of the show. “We have a strong team.”

Four months of rehearsals will take place before the show opens. Because it’s a “junior” production, the show’s running time is only one hour, compared with the more than two-hour Broadway production.

Theatre Lawrence is raising private funding to help pay for the production, Doveton said, although there is no charge for the young people and their mentors to take part.

For anyone interested in participating, an informational meeting has been scheduled for 7 p.m. Feb. 19 at Theatre Lawrence, 4660 Bauer Farm Drive. Morgan and members of the national foundation will be on hand that night to answer questions.

That will be followed in coming weeks by group sessions. From those sessions, Gillespie will determine who’s comfortable in which role.

“We get to know the groups after several sessions, and they get to try different hats,” Gillespie said.

The performance is scheduled for June 28 and 29.

Doveton first learned of the Penguin Project from a colleague at the Lincoln Community Playhouse in Nebraska. Theatre Lawrence is one of about 30 chapters nationwide taking part in the project.

While the end result will be a full-blown stage production, preparing for the show will have its own rewards.

“People will come together in a safe, creative environment,” Doveton said.