KU is the setting for professor’s most recent detective novel 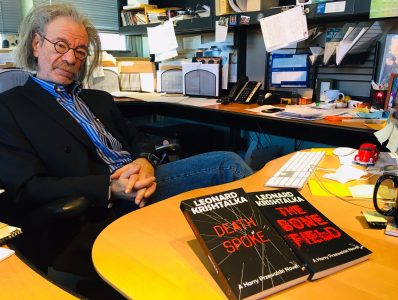 Leonard Krishtalka has published the second novel in his detective series, "Death Spoke." Krishtalka is the director of KU's Natural History Museum and its Biodiversity Institute.

By day, University of Kansas professor Leonard Krishtalka is the director of the Biodiversity Institute and Natural History Museum, but by night he writes fiction.

Though educated as a scientist, for as long as Krishtalka can remember he has loved writing. His moonlighting has paid off with the completion of three novels. The most recent, “Death Spoke,” was released in November and centers on the murder of the dean of the College of Liberal Arts and Sciences at KU.

Krishtalka talked about his novels, which feature a “hard-boiled detective,” on a recent morning, sitting at his desk in his sixth-floor office in Dyche Hall. He emphasized that the books are works of fiction; the characters and incidents are strictly products of his imagination.

Published by Anamcara Press, “Death Spoke” is the second in the three-part Harry Przewalski detective series. His first novel, “The Bone Field,” was released in June, and the third book in the detective series, “The Camel Driver,” will be available this spring. The books don’t need to be read in any particular order, though, Krishtalka said.

The last name of his protagonist, Przewalski, comes from am endangered Mongolian horse species named after Russian explorer and military officer Nikolai Przhevalsky.

Krishtalka, a paleontologist, made Przewalski a student of paleontology who quits the field to become a detective after the brutal murder of his fiancée. Crime solving is a bit like the scientific unraveling of the past.

“In ‘The Bone Field,’ Przewalski says now the bodies he digs up are fresh, not fossils,” Krishtalka said.

“The instructions to writers are to write what you know, and what I know are the unsolved intrigues of nature,” Krishtalka said. “That’s what I like to write about, wrapped inside a mystery narrative of the universe.

In ‘Death Spoke,” the dean of KU’s College of Liberal Arts and Sciences is murdered in Abilene while she is on the Wheat State Tour. The dean’s lover, who happens to be the chair of the anthropology department, is accused of the murder, and he hires Przewalski to solve the mystery. Some of the scientific intrigue in the book involves prehistoric art found in caves in Spain and France.

“I wanted Harry to be a different kind of private eye — intelligent, well-read, street-smart — not the stereotypical hard drinker who ultimately becomes a self-pitying caricature,” Krishtalka said.

Krishtalka has been at KU for 24 years. He was born in Montreal, Canada, and graduated from McGill University there before heading to the U.S., where he earned his doctorate in vertebrate paleontology at Texas Tech University.

He spent 15 years at the Carnegie Museum of Natural History in Pittsburgh, where he was a research paleontologist. From there he went to the National Science Foundation in Washington, D.C., and in 1995 he was appointed as the director of KU’s Biodiversity Institute and Natural History Museum.

Krishtalka said categorizing his books as mysteries was too limiting.

“On the surface, they are murder mysteries, but they are really scientific intrigue wrapped inside the intrigue of the human condition,” he said. “There isn’t a novel written that doesn’t have some mystery or intrigue. I dare anyone to name a novel that isn’t a mystery or intrigue — even ‘Moby Dick,’ ‘Anna Karenina’ and ‘The Color Purple’ have it.”

While Krishtalka has always loved writing, he has never thought about making it a full-time career.

“I just write as part of every day,” he said. For his job, he writes scientific papers, chapters in books and grant proposals.

He has never had a formal writing class; instead, he says, he writes from instinct.

“I like the writing to pull me along,” Krishtalka said. “It’s like a horse hitched to a wagon, and the wagon is the novel. The horse will sometimes veer off in a completely unexpected direction and take you down avenues you never anticipated going down, and the novel has the freedom to evolve in different directions and to surprise me as it evolves.”

Though his book involves the murder of a KU administrator, he hopes people don’t think he has something against the university.

“That couldn’t be further from the truth. I love KU; it’s a great university,” he said. It just also happens to make an intriguing setting for a novel.