A love of books and a disdain for bullies: Theatre Lawrence brings Roald Dahl’s ‘Matilda’ to life 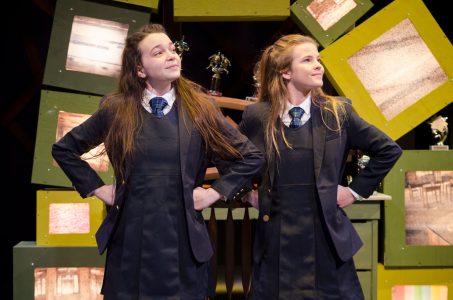 Juliana Allen, left, and Viviana “Vivi” Riffel play the role of Matilda during a dress rehearsal of “Matilda: The Musical” at Theatre Lawrence on Monday, Dec. 2, 2019. The two will play the role on alternating days during the show's run.

Before she started directing “Matilda” for Theatre Lawrence, Widge Yager did her homework on the man behind the musical.

Roald Dahl, the beloved British author of the 1988 book on which the hit musical is based, had a particular worry as he was writing the story about his child genius: that TV would replace books in children’s lives.

“He was legitimately concerned that children would not read anymore, that they would just watch television,” Yager said.

Dahl’s Matilda is a 5-year-old who lovingly devours Jane Austen and Charles Dickens while her parents mindlessly consume TV melodramas with “bosomy” starlets being embraced by “craggy actors in the moonlight.”

“Looks is more important than books,” Matilda’s mother declares over a TV dinner. “A girl doesn’t get a man by being brainy.” 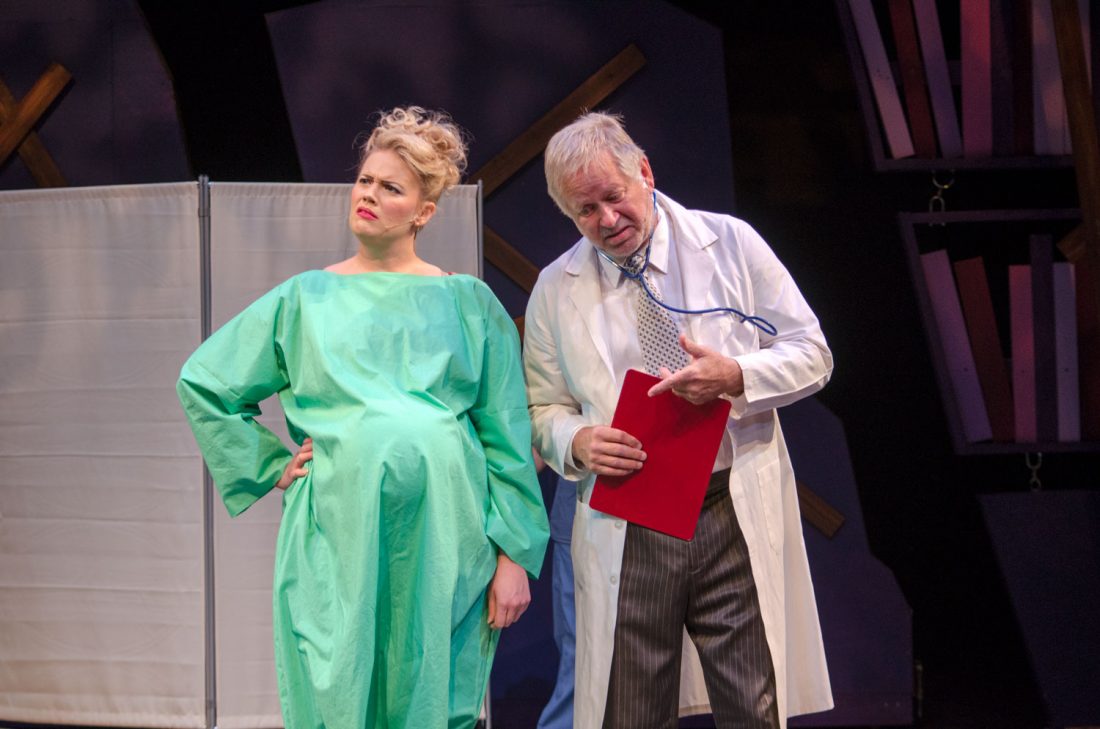 Secily Rees and Jim Tuchscherer sing a musical number during a dress rehearsal of “Matilda: The Musical” at Theatre Lawrence on Monday, Dec. 2, 2019. Rees plays Matilda’s mother in the show.

Because he died in 1990, Dahl had no conception of the internet and the different — some would argue more pernicious — kind of “screen time” that would lead to so much hand-wringing.

But he was intimately familiar with another concern that has only recently entered public discourse in a serious way: bullying.

The brainy Matilda — she can “multiply complicated figures in her head like lightning” — is bullied not only by her tacky and neglectful parents, Mr. and Mrs. Wormwood (played by Brian Williams and Secily Rees), but also by the cruel headmistress of her school, Miss Trunchbull, who in the musical is actually played by a man because, as Yager noted, the show’s creators “wanted her to be huge.” The actor who plays Trunchbull, Andrew Ramaley, “is like 6-foot-4” and looms, Yager said. 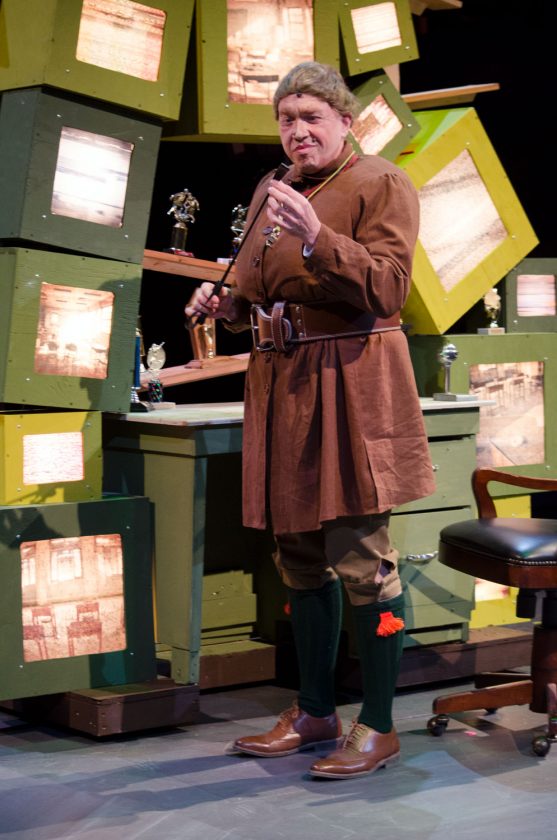 Andrew Ramaley rehearses a solo musical number during a dress rehearsal of “Matilda: The Musical” at Theatre Lawrence on Monday, Dec. 2, 2019. Ramaley plays the role of Miss Trunchbull.

“Dahl can be dark,” Yager said, so it was important — because it’s a musical and because there are 21 kids in the cast — for the production to strike the right tone between dark and light. The production accomplished this, she said, by being “fun scary” rather than “scary scary.”

“It’s a wonderful story about overcoming the negative influence of bullying,” Yager said. “And it will appeal to adults and children both.”

The injustices heaped on Matilda — and the creative way she deals with them — are a big part of what drew Juliana Allen, 15, and Viviana “Vivi” Riffel, 12, to the role. The young actors will play Matilda on alternating days.

“I like how she’s brave and trying to get fairness for everyone,” said Vivi, who is a seventh grader at West Middle School.

“She’s a fun character to play because she’s very smart,” said Juliana, who is homeschooled. 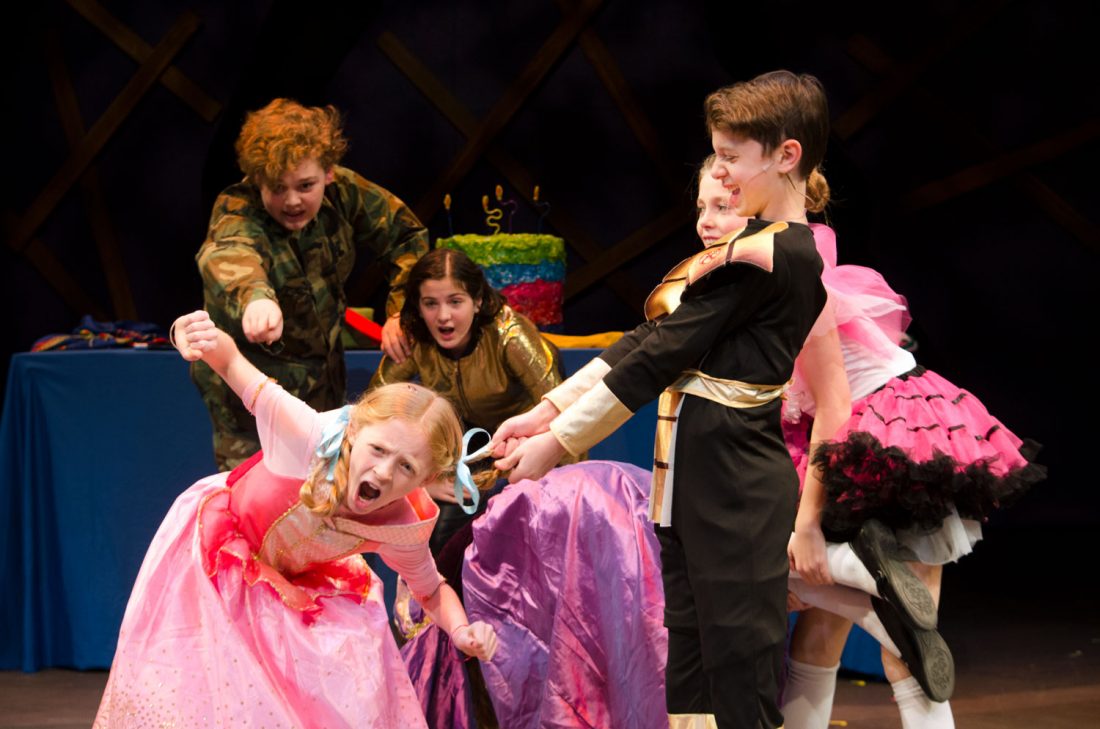 Children perform in the dress rehearsal of “Matilda: The Musical” at Theatre Lawrence on Monday, Dec. 2, 2019.

The girls are considerably older than Dahl’s precocious 5-year-old, of course. Realistically, Yager noted, very young children could not take on “such a demanding role.”

Even though at one point they were each other’s competition, one of the best things about the show, the two girls agreed, was the close friendship they’ve formed during rehearsals. Both have been acting since they were little kids — Vivi had the title role in last year’s Theatre Lawrence production of “Annie” — and making a friend with theatrical interests has been uniquely meaningful.

But how did they decide who gets to play opening night? “Rock-paper-scissors,” Vivi said matter-of-factly. Juliana won that contest, but “I get to play closing night,” Vivi said.

“Matilda” is fresh off Broadway, Yager said, and “Lawrence is the first community theater in this area to produce it.” The show opens Friday at Theatre Lawrence, 4660 Bauer Farm Drive, with performances every weekend through Dec. 22. Tickets may be purchased online at theatrelawrence.com or by phone at 785-843-7469. 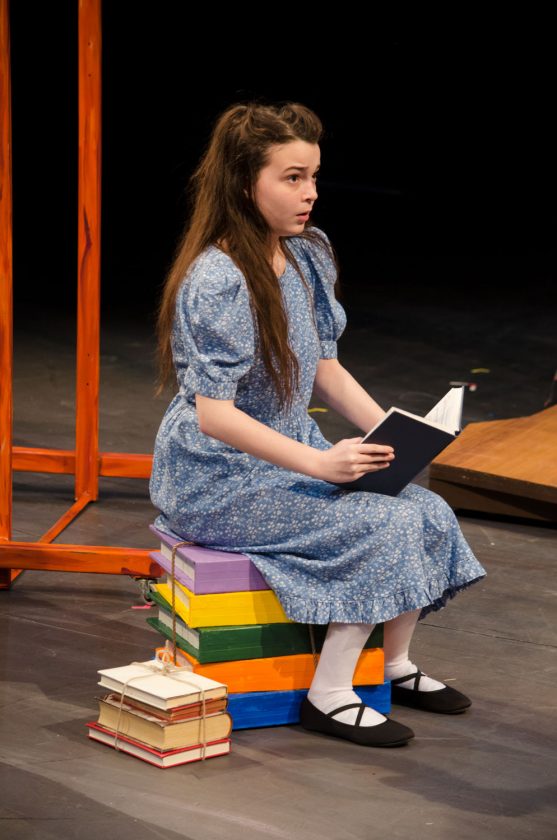 Juliana Allen plays the role of Matilda during a dress rehearsal of “Matilda: The Musical” at Theatre Lawrence on Monday, Dec. 2, 2019.