Forget ‘Jingle Bells’; a band will be coming to Lawrence with original holiday tunes 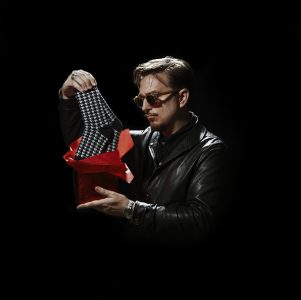 JD McPherson will perform Dec. 17 at the Bottleneck as part of his "SOCKS: A Rock N' Roll Christmas Tour."

JD McPherson knows his Christmas song “Socks” might not be as popular as Mariah Carey’s “All I Want For Christmas Is You,” but that’s not what he was going for when he wrote it.

He knows his band has its own small following who enjoy his original song. It’s about a kid on Christmas morning who gives his gift a  “shimmy and shake” and discovers “socks, the worst gift I ever got. Why waste the paper on a lousy pair of socks?”

The JD McPherson band is kicking off its “Socks: A Rock N’ Roll Christmas Tour” and will play at 8 p.m. on Dec. 17 at The Bottleneck, 737 New Hampshire St. Tickets can be purchased at thebottlenecklive.com.

McPherson, a singer and songwriter who is known as a retro-rock revivalist, according to Rolling Stone, recorded his first Christmas album with New West Records, including  “Socks” in 2018. He had some ideas for songs and then his hero, English musician Nick Lowe, came out with the seasonal album “Quality Street,” singing songs with a little edge about the Christmas holiday.

“He is an intelligent writer and this was a new approach to the genre,” said McPherson, speaking from his home in Nashville, Tenn. He decided to breathe some life into Christmas music himself.

McPherson said it was important that his album had no covers. The songs had to be original and rock ‘n’ roll.

People who have an undercurrent of bubbling rage will like the music: “People yelling inside their cars,” as he put it.

McPherson is not a cynic about the holiday.

“I love Christmastime and always have,” he said. “I don’t have that contrary attitude about it. I grew up in southeast Oklahoma, and we were never inundated in October with Christmas music. It was a special time of year, and I loved everything about it.”

During the tour, which begins Dec. 3 in Seattle, the band will perform other songs from the album, such as “Holly, Carol, Candy & Joy” and “Ugly Sweater Blues.”

The tour is scheduled to end Dec. 22 in Nashville. He plans to be home in time to give his children some socks for Christmas.