Inspired by his experience as an immigrant, local musician explores topic through multimedia performance 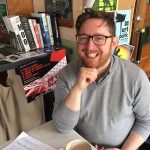 On the surface, there is nothing to identify Nick Carswell as anything but another white American, sitting in a Lawrence coffee shop sipping a latte on a Wednesday morning.

He jokes that his accent has slowly “naturalized” over the past eight years since moving here from Dublin, but Carswell’s identity is clear.

Emigration is part of the Irish identity, Carswell, 37, said.

“The Irish are all over the world. We have a history of sending our people abroad. It’s in our blood,” he said.

Lately, he has been exploring the theme of belonging and what it means to be an immigrant living in the U.S., especially in the past four years. Although immigrants have faced bigotry in the past, he feels it’s simmering once again.

“Which is worrying and makes you feel vulnerable and like you don’t belong,” he said.

That vulnerability has become a source of inspiration for Carswell. As a musician and multimedia artist, he has created the performance “Changing Shades: An Immigrant’s Story of Confusion & Belonging.” Through music, video, light and color elements, he will weave together a show influenced by ideas that have been weighing heavily on him as an immigrant. He will perform May 11 at the Lawrence Arts Center.

This is new ground for Carswell, who didn’t feel vulnerable when he and his wife, Hannah, first arrived in the U.S. eight years ago. They came on intern visas. Hannah was working with a graduate program at the University of Kansas. Carswell went to work as an intern with ArtsKC Regional Arts Council. They remain here on work visas. Carswell is now the program manager for KU’s Audio-Reader.

As Carswell has been exploring the conflict and confusion that come with being an immigrant in a shifting culture, he finds himself identifying with the immigrants he hears about on the news.

“I have a lot of privilege because I am white and have an education and that makes me different,” he said. “But when I hear anti-immigration rhetoric, I do feel they are talking about me.”

For the couple, the immigration issue has changed with the birth of their daughter, Emily, three years ago. A second child is expected at the end of May.

“That’s something to ponder,” Carswell said. “Our daughter has more identity in this country than we do. She is a citizen, and that will never be questioned. She is our daughter and would have been born wherever we happened to be at that time.”

While exploring the theme of belonging, Carswell noted that they wouldn’t still be here if they didn’t feel part of the Lawrence community.

He was awarded an ArtsKC Inspiration Grant toward the purchase of lighting and music production equipment for this project.

He will be accompanied by Maria Cuevas, formerly known as Maria the Mexican, and a Bolivian multi-instrumentalist, Amado Espinoza. The concert begins at 7 p.m. at the Lawrence Arts Center, 940 New Hampshire St. Tickets are $10 and will only be sold at the door. He will have a performance the day before at 7 p.m. May 10 at the Kansas City Irish Center, 19 Linwood Blvd., Kansas City, Mo.