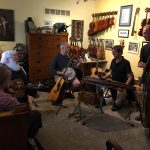 While the five members of the Alferd Packer Memorial String Band were setting up for rehearsal Monday night, Gayle Sigurdson poked her head in the room to say they had been mentioned on National Public Radio.

Monday was tax day, and Sigurdson, the wife of band member Steve Mason, heard that the NPR show “Marketplace” had included the band in a story about tax day parties.

The news caused the group to reminisce about the 25 years they held jam sessions in the lobby of the downtown Lawrence post office as procrastinators rushed in to mail their tax returns on April 15. The tradition ended when most people began filing their taxes online. 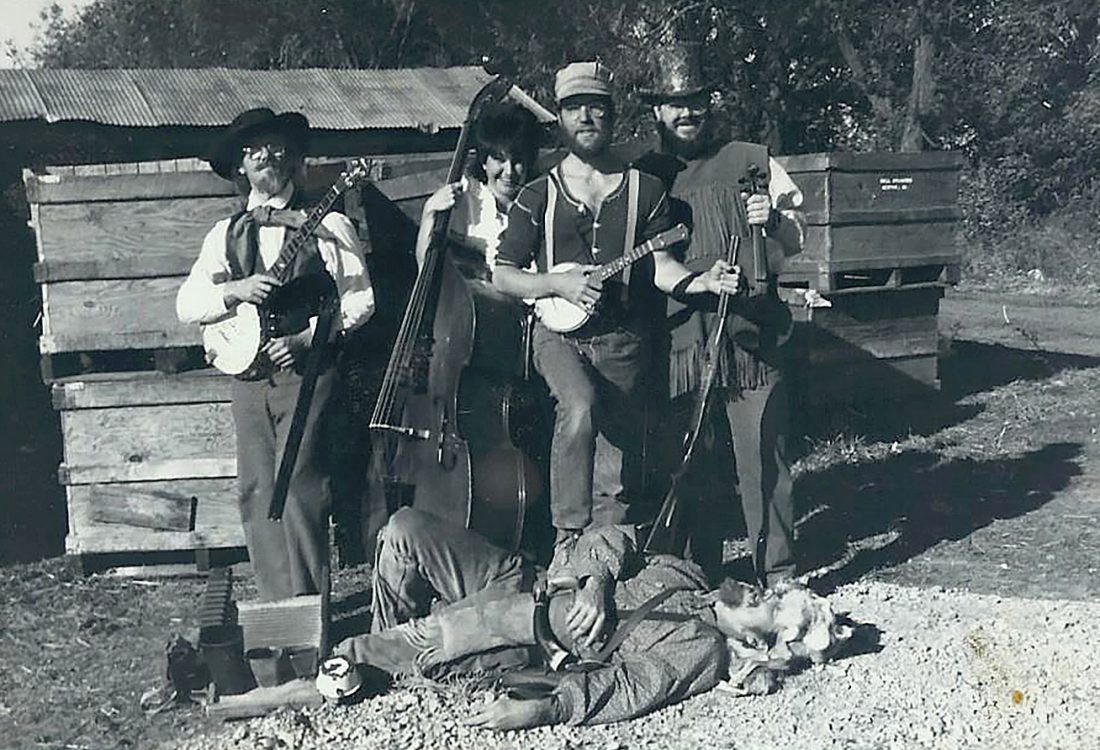 An early photo of the Alferd Packer Memorial String Band taken around 1982-1983. From left, Jim Krause, Julie Bennett Hume, Doug DuBois and Steve Mason, with Jim Brothers at their feet.

The quarter-century community tradition is a highlight woven into the band’s 40-year history, which has been on the members’ minds as they prepare for “Chomp,” an anniversary concert slated for 7 p.m. Saturday at Lawrence’s Cider Gallery, 810 Pennsylvania St. During the two-hour show, nine “ex-Packers,” as Mason refers to them, will be joining the band to perform some of the songs they wrote.

Back in 1979 the late Jim Brothers, who became a nationally known sculptor, and several other musicians played for beer at Johnny’s Tavern in North Lawrence. At that time, a friend of Brothers’ sent him a postcard from Colorado of the infamous Alferd Packer, the “Colorado Cannibal.” In 1874 Packer was guiding five men to a gold mine when they were caught in a mountain snowstorm. It’s uncertain how the men died, but Packer survived by eating their remains.

A certain likeness between Packer and Brothers was noted, and the Alferd Packer Memorial String Band was born. 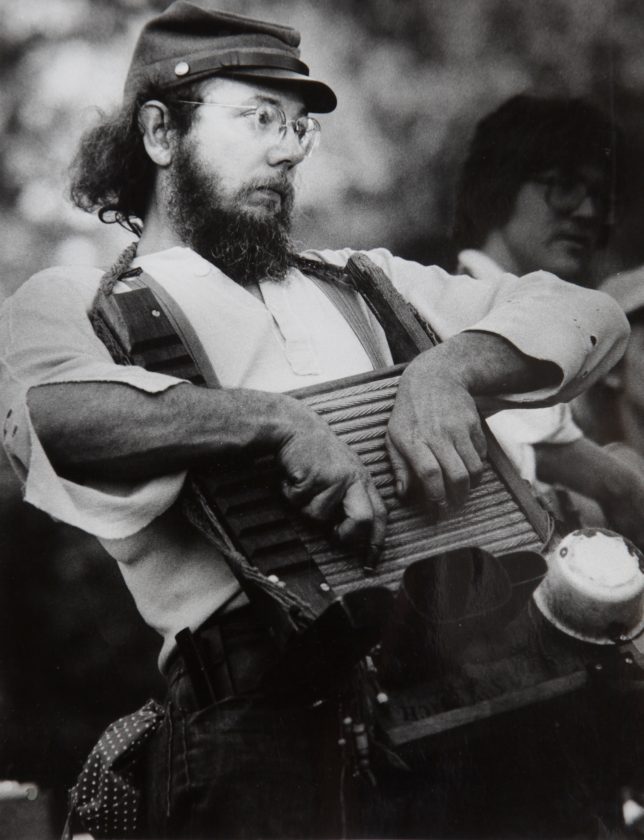 In this photo, date unknown, Jim Brothers is playing the washboard in the Alferd Packer Memorial String Band. Brothers helped create the band back in 1979.

Dressed in an old-time costume, Brothers played the washboard. Sometimes, going full mountain man, he even donned a coyote head for a hat. The last original member of the group, Brothers died in 2013.

Mason became a band member two years after the group was founded, playing the fiddle, bass, guitar and mandolin.

Everyone in the band has a day job, said Mason said, who is a luthier. He creates and repairs stringed instruments in his home shop in Lawrence.

Mike Yoder, a longtime former employee of the Journal-World, is a photographer by day, and for 34 years has been playing guitar, bass and mandolin in the band.

When Matt Kirby first heard the Alferd Packer Memorial String Band perform, he wanted to play with them. He joined the group in 1987, playing the hammered dulcimer, accordion and percussion.

“It has become a constant in my life,” said Kirby, who is an artist by day. 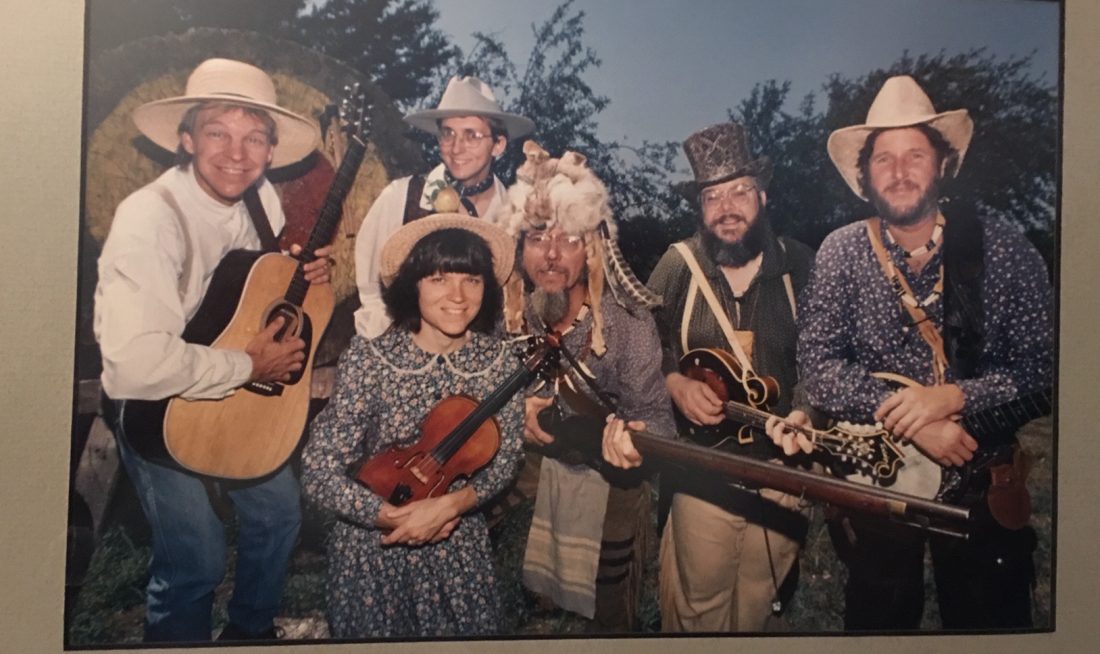 A photo of the band performing in 1989 at Silver Dollar City, Mo. From left: Mike Yoder, Beth Yoder, Matt Kirby, Jim Brothers, Steve Mason and Jim Rome. Yoder, Kirby and Mason are still in the band.

For 20 years, Lauralyn Bodle has played the fiddle and bass with the band. She teaches Italian at the University of Kansas. 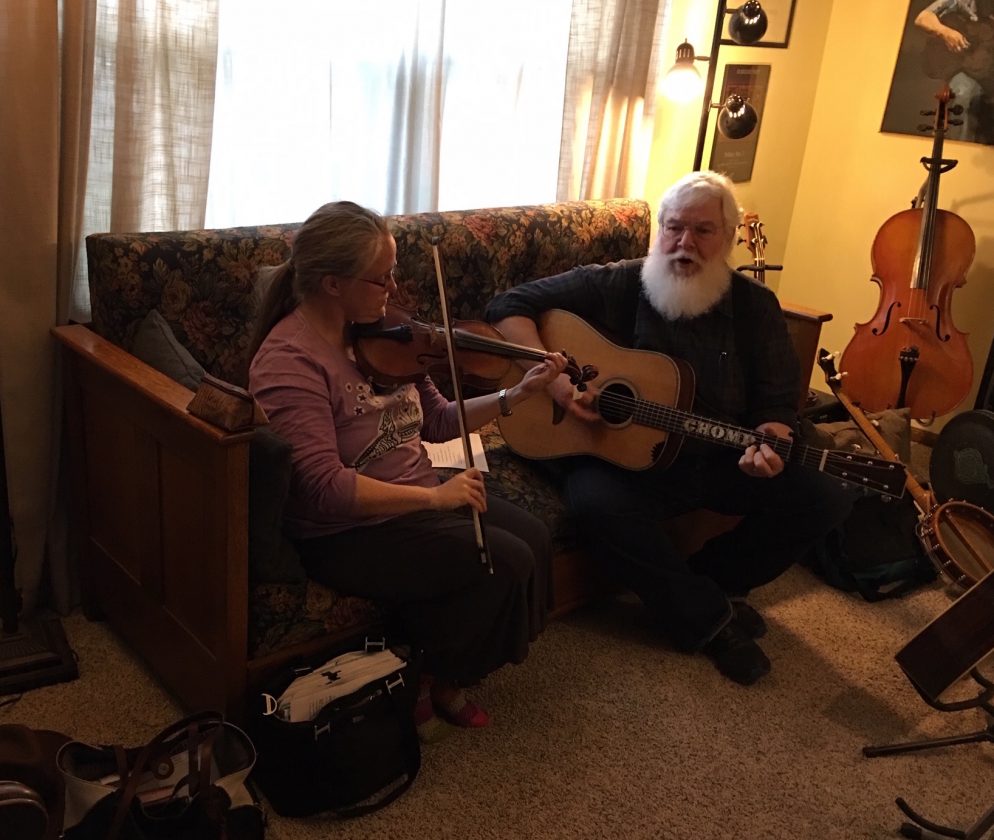 Noah Musser, the newest member, is a visual arts instructor at Eudora High School. For the past five years, he has played the banjo, bass and guitar.

Everyone in the group writes songs for the band. For many years the band traveled around the region as part of the now defunct Kansas Arts Commission touring program. Mostly they play a few concerts in Lawrence each year and travel around the state performing. They just returned from playing the two-day Big Muddy Folk Festival in Boonville, Mo.

Mason describes the group’s style as old-time string band music. Saturday night they will play some of their all-time favorites from the “Old Time” genre, as well as the ever-popular “William Tell Overture.”

Plus, they will be singing the “Ballad of Alferd Packer,” written by Doug DuBois, a former member who will be performing in the concert. The song includes a paraphrase of the judge’s words at Packer’s trial for cannibalism: “O Alferd Packer, you voracious man-eater! You should be skinned alive! There were only seven Dimmy-crats in Hinsdale County, and now you done et five.”

Tickets for Saturday’s concert are $10 at the door. For more information, go to www.alferdpackerband.com