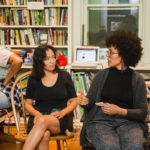 A group of local residents have come together to create a new multicultural community center.

The Eastside People’s Intercultural Center, or Epicenter, recently began hosting a series of speakers and workshops centered on the arts and social activism, and the center has additional programming underway. Connie Fiorella Fitzpatrick, one of the center’s seven coordinating members, said Epicenter aims to bring together the diverse cultures of Lawrence.

“For me, it is important to create a space for culture, including the arts, that gives you a sense of belonging,” Fiorella Fitzpatrick said. “And right now we don’t have that, so we are imagining it together for a potential future.”

In August, the Epicenter began a yearlong speaking series, the People’s Art Speakers Series, with help from a grant from the Kansas Department of Commerce Creative Arts Industries Commission. The series aims to highlight the intersection of art and activism in Lawrence, and the center will be using other grants to help fund a walking tour and an exhibit in the coming months. The events are part of a year of exploratory programming as the center gets started, which, along with ideas and feedback from the community, will help shape the center going forward.

Coordinating member Alex Kimball Williams said that in addition to creating a sense of belonging, Epicenter is about making information more accessible and acknowledging all the city’s cultures.

“That acknowledgment is really important, because for the most part we just kind of are the different ones,” Kimball said. “And then you have to put yourself into this majority society. Lawrence being fairly progressive for Kansas, but still I think that there’s a huge need for us.”

The Epicenter doesn’t have its own building at this point, but the center’s yearlong series of speakers has been hosted in a community room at the Sunrise Project, 1501 Learnard Ave. Sunrise is also the fiscal agent for three grants that will help fund the center’s programming over the next year.

Coordinating member Leah Evans said she sees the center as a community hub, and a place where connections can happen between different groups. Evans said the center will grow and morph as the community changes.

The speakers series takes place the last Thursday of each month, and thus far has included lectures and workshops by the Black Literature & Arts Collective of Kansas, artist and community organizer Armando Minjarez, and fashion designer Whitney Manney. The series continues with its next installment on Nov. 29, when muralist and poet José Faus will host a discussion and writing workshop. After a break for the holidays, quilter and historian Marla Jackson will host a discussion in January.

Other events the Epicenter plans to host in its first year include an exhibition and walking tour about local social movements, especially those that intersect with arts and culture. Coordinating member Dave Loewenstein said the exhibition project will document untold or lesser-known stories of social movements in and around Douglas County since the 1960s. Loewenstein said the walking tour will visit places of cultural, artistic or social significance and hopes to use first-person accounts to tell the stories of those locations.

“The walking tour will be an opportunity for people to visualize, imagine some of the events and people that have really inspired a sense of Lawrence as being a place of progressiveness,” Loewenstein said. “But those sites and places might be invisible to us today.”

As part of the year of exploratory programming, Fiorella Fitzpatrick said they are taking input from event attendees and also welcome feedback and suggestions through the center’s website, epicenterks.com, and social media accounts.