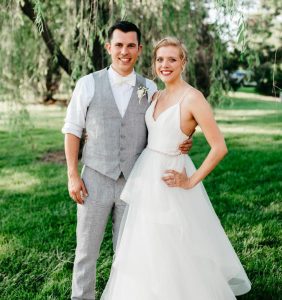 Liesel and Sean Callahan are excited to announce their recent marriage in Lawrence, Kansas, on June 1, 2019. Liesel is the daughter of Drs. Lee and Tandy Reussner of Lawrence, and the granddaughter of Ron and Elaine Reussner of Leawood, KS, and Michael and Helen Beckett of Topeka, KS. Liesel’s godmother and namesake, Liesel Emmerling, traveled from Freiburg, Germany, to be a part of the ceremony. Sean is the son of Christina Callahan of Orlando, Florida, and Tim and Denise Callahan of Richmond, Virginia. Sean’s grandfather is Jim Gallogly of Hampton, Iowa. The wedding, held at First United Methodist Church, began with 30 minutes of Prelude music performed by family and friends. The couple was attended by Maid of Honor Hannah Reussner, (sister of the bride) and Best Man James Callahan (brother of the groom). Bridesmaids wore pale pink long gowns and included Katelyn Alderson (Paradise, CA), Stephanie Hitti (Richmond, VA), Nicole McGovern (Chapel Hill, NC), Allie Smith (Kansas City, MO), and Caroline Wichman (Richmond, VA). Honorary Bridesmaids were Annie Callahan, Erin Callahan, and Shannon Callahan (sisters of the groom). Flower girls were Sean’s nieces, Kenneally and Harper Coyman. Groomsmen wore gray slacks and white buttondown shirts with pink ties and suspenders. They included John Markowski (Tallahassee, FL), Richard Norman (Orlando, FL), Andrew Thommen (Greenville, SC), Christopher Wenger (Orlando, FL), and Chris Wichman (Richmond, VA). The ring bearer was Alexander Erickson (cousin of the bride). Ushers were Kevin Callahan, Ryan Callahan, Evan Erickson, Adam McGovern, and Jose Nepuis. The officiants were Andrew Shaw of Lawrence, KS, and Rev. Corey Widmer (via webcast from Richmond, VA). A reception was held at the home of the Reussners. Local eateries, Fuzzy’s Tacos and Silas & Maddy’s Ice Cream, catered the event. Dancing, sparklers, and a sendoff in a paddleboat across the backyard pond filled out the evening. The couple now makes their home in Richmond, VA, where Sean is an Account Manager for RunSignUp, and Liesel is a marketing specialist for Trivadent.