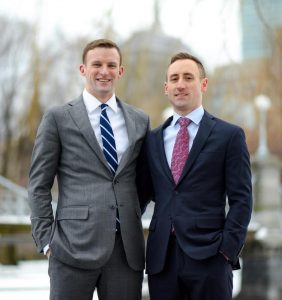 Mason Ennis Heilman and Charles Galbraith Brown IV were married at 5:00 pm on September 28, 2019, at the University of Massachusetts Boston. Mason is the son of Steve and Sally Heilman of Lawrence, KS. Charles is the son of Charles Brown III of Weymouth, MA, and Maureen Connell of Pembroke, MA. Adam McGonigle of University City, MO, and Kevin Buss of Boston, MA, officiated. Mason’s two brothers, Shelton Heilman of Olathe, KS, and Winston Heilman of Lawrence, KS, stood with him during the ceremony. Charlie’s three brothers, Tim Brown of Pembroke, MA, and Sam and Vinny Brown of Weymouth, MA, stood with him. Following the wedding, a reception was held on the UMass Boston campus. The couple met in May of 2017, at Nellie’s Sports Bar in Washington, DC, where Mason was living at the time. After dating long distance for over a year, Charlie proposed on Race Point Beach in Provincetown, MA, in July of 2018, and Mason moved to Boston in October of 2018. Charles is a graduate of UMass Boston and Pembroke High School in Pembroke, MA. He currently works as a financial advisor. Mason is a graduate of the University of Missouri Saint Louis, the University of Kansas, and Free State High School. He currently works as a Legislative Aide in the Massachusetts General Court. The couple resides in the Roxbury neighborhood of Boston.