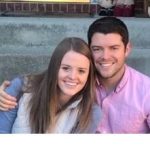 Matthias Reiber, Richmond KY, and Angela Hochhalter, Lexington KY, are pleased to announcement their engagement. A 2010 graduate of Lawrence High School, Mr. Reiber received a Bachelor of Science in athletic training from the University of Kansas in 2014 and a Masters in sport administration from Bowling Green State University in 2016. He is currently employed as an athletic trainer with the football team at Eastern Kentucky University. His parents are Beth Reiber and Larry Estes. Ms. Hochhalter received a Bachelor of Science degree in exercise physiology from the University of Louisville and a Bachelor of Science in athletic training from Eastern Kentucky University. She is a sales representative with Donjoy. Her parents are Brandon and Laurie Hochhalter. A small July wedding with family is planned near Zion National Park in Utah.