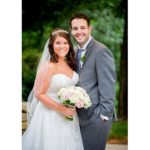 Sally Ann Konzem and Andrew (Andy) Richard Burns were married on July 14, 2018, at Arterra Event Gallery in Lawrence. Officiant for the ceremony was the Honorable Paula Martin. Attending the bride were her maid of honor, Kate Mather, and bridesmaids Allie (Hock) Chroust, Rebecca (Weinaug) Knight, and Mara Kunin. Supporting the groom were his best man, David Ghitis, and groomsmen Justin Nutter, Mike Grudowski, and Brian Lewallen. Reed and Ava Knight served as ring bearer and flower girl. Sally is the daughter of Richard Konzem and Patricia (Patti) Bender, of Lawrence; and the granddaughter of Robert and Beverly (Heidrick) Konzem, of Salina, Kansas; and Marion (Johnson) Bender and the late Gordon Bender of Waupaca, WI. The bride is a 2007 graduate of Lawrence Free State High School and earned her bachelor’s in psychology from Lawrence University (Appleton, Wis.) in 2011. Sally earned her master’s in mental health counseling from Emporia State University in 2013. After earning her degrees, Sally worked as a mental health counselor at Emporia State University (201316) and Washburn University (201617). Sally currently works as a counselor at the Bishop Wellness Center at Willamette University in Salem, Oregon. Andy is the son of Linda Burns, Bel Aire, Kansas, and the grandson of Edith (Hayes) Burns and the late Sam Burns, of Wichita, Kansas. The groom is a 2007 graduate of Wichita Heights High School and earned his bachelor’s in journalism from Kansas State University in 2011. After earning his degree, Andy worked for Loomis and the Topeka Capital Journal. Andy currently works in digital marketing at Dealer Spike in Wilsonville, Oregon. The couple honeymooned in Oahu and Kauai in July. They reside in Keizer, Oregon