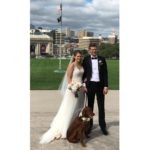 Sarah Rose Mitchell and Jacob (Jake) Erick Ediger were married on September 8th at Union Station in Kansas City, Missouri. Judge Paula Martin of the Douglas County, Kansas District Court performed the ceremony. Laura Tully, the bride’s sister, served as matron of honor, and Brandon Ediger, the groom’s brother, was the best man. The bridal party also included bridesmaids Sofi King, Hallee Foster, Lindsay Fiorello, Mackenzie Pfortmiller, and Emily Aguilar, groomsmen Austin Werner, Parker Conlin, Zach Sheppard, and Chapman Williams, groomswoman Miranda Norfleet, and flower dog Betsy Jo, the couple’s Irish Setter. The bride, 25, is a daughter of Lawrence native Jay Mitchell and Kimberly Mitchell of Menlo Park, California. She attended the University of Kansas, where she was active in the Gamma Phi Beta sorority. She graduated from KU with honors in 2015 and currently attends Stanford Law School. The groom, also 25, is a son of Ron and Sally Ediger of Topeka. He received his undergraduate degree from KU in 2014, where he was a member of the Beta Gamma Sigma honor society. He earned his law degree from KU in 2017 and practiced law in Wichita until recently. The couple met through mutual friends during their sophomore year at KU. They made their home in Lawrence until 2017 and recently moved to Denver, where Mr. Ediger will practice law with the firm Kutak Rock. Ms. Mitchell also plans to work in Denver, as a summer associate with the law firm Gibson, Dunn & Crutcher in 2019. The newlyweds are honeymooning in and around Grand Tetons and Yellowstone National Parks.