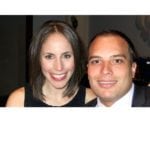 The engagement of Shira Flescher and Bernard Raphael is proudly announced by Anne and Bob Schulman, and Sheila Raphael, James Raphael and Judi Cettel. Shira is the daughter of Anne Schulman, of Lawrence, and the late Eric Flescher. Bernard is the son of Sheila Raphael and James Raphael, of Cincinnati, OH. Shira is a graduate of Lawrence High School, as well as The University of Colorado at Boulder and New York University. She is a Director of Music for Brands & Advertising at Sony Music Entertainment. Bernard is a graduate of Saint Xavier High School in Cincinnati, OH and the Carroll School of Management at Boston College. He is a Senior Vice President in the private equity sponsor coverage group at Capital One Healthcare. A January 2019 wedding is planned in New York City where the couple currently resides.