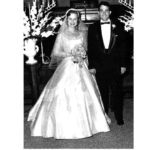 Alan and Diane Sanders celebrated their 60th wedding an­niversary on June 22, 2018. The couple met on a blind date in 1955, and were married three years later in Wichita, Kansas. They moved to Lawrence in 1965 when Alan filled the void of a full time clinical ana­tomical, and forensic pathologist at Lawrence Memorial Hospital. He was soon joined by Dr. Laurance (Bud) Price, and later, by Dr. Carol Moddrell. Alan and his partners also founded Lawrence Clinical Laboratories, which provided private, clin­ical laboratory services in Lawrence. Alan fully retired in2000, but has stayed active with gardening, reading, and cycling, and numerous community volunteer positions. Diane is a board certified bacteri­ologist/medical techno­logist, but has spent most of her married life raising a family, garden­ing, and also volunteering for various local philanthropic organizations.

Diane (and now Alan) volunteers for Meals on Wheels every Thursday (which she has done since 1975), and have been mem­bers of Plymouth Con­gregational Church since 1965. The couple has two sons: Dr. Karl Sanders of Salt Lake City, Utah, and wife Natalie, and their three children; and Curtis Sanders of Aspen, Colorado, and wife Cather­ine and two children.

The extended fam­ily is planning a 60th anniversary celebration together at a later time this Summer.