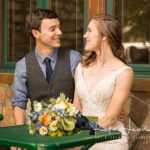 We tied the knot! Chris Orlando and Meaghan Orlando are thrilled to announce their recent wedding on June 2, 2018. They were married in a private ceremony in the lovely backyard of Chris’s parents, Pat and Kevin Lorenz. As luck would have it, Mea­ghan’s parents, Ivy and Michael Travis, live only four blocks away and graciously hosted a wonderful rehearsal dinner the previous night. The wedding day was a total success ­ it didn’t rain, Meaghan looked beautiful in her dress, and Chris seren­aded his new bride with a song that he wrote. Chris’s sister, Alyssa Lorenz, who was scheduled to officiate the Royal Wedding last month, had to cancel to prep for this one. The preparation showed as she put on a dazzling display of heartfelt words and hilarious jokes that would merit a Netflix comedy spe­cial. Attendants ate co­pious amounts of cookies and drank sev­eral non­alcoholic drinks that, based on the wedding pictures we just had developed, may have actually had alcohol in them. Kevin quickly gained a repu­tation as the world’s best bartender. Mea­ghan’s father Michael, sister Katie, and friend Christina brought everyone to tears with their sincere toasts, while Chris’s friends used the opportunity to bring up embarrassing stories with an em­phasis on ex­-girl­friends. All in all, the day was perfect and Chris and Meaghan are excited to begin the next chapter of their lives together, surroun­ded by the best friends and family anyone could ever ask for.