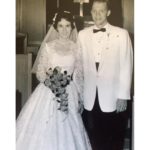 John and Shirley Reese celebrated their 60th wedding an­niversary June 8, 2018. They have lived in Lawrence since 1968. John graduated from KU Medical School (1961) and practiced general surgery with Jones, Manahan & Reese. Shirley gradu­ated from St. Francis School of Nursing (Wichita, 1957) and re­tired from nursing when sons Jeff and Gra­ham were born (1960, 1963). They are mem­bers of Trinity Epis­copal Church.