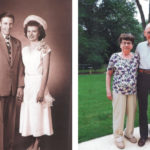 Carl and Doris will celebrate their 70th wedding anniversary with family. Carl Guggisberg and Doris Roberts were mar­ried June 13th, 1948 at the Methodist Church in Burns, Kansas. Carl served on a Navy destroyer in WWII. He spent 30 years in the Naval Reserve, retiring in 1978. He worked in the parts department at Ford dealerships in Topeka; Glendale, California; and Lawrence for over 40 years. He retired from Laird Noller Ford. Doris worked at the Topeka Air Force Supply Depot for 7 years and was a homemaker.

They have two daughters, Carol (Steve) Martindale of Lenexa; and Kim­berly (Clarence) Rayton of Lawrence. They also have five grandchildren and five great­-grandchil­dren.