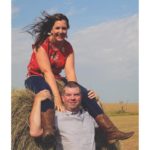 Juniper McCoy, daughter of Anna McCoy and Jerry Wettengel, Son of Martha and Teddy Wettengel were married on August 18, 2018. The ceremony was held at the acreage that Jerry and Juniper share in Douglas County and included all 5 of their children. Amber Brethouwer, Ordained Minister of the Church of Universal Life officiated the ceremony. The wedding was beautifully orchestrated by oldest daughter, Payton. Sons Cobin and Cameron escorted Juniper down the aisle and attended Jerry as Groomsmen along with oldest son and Best Man, Riley. Paisley, the youngest daughter preceded the wedding party as flower girl.