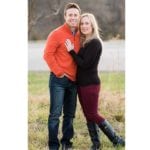 Rodney West and Bernadette West of Lawrence, KS, are happy to announce the engagement of their daughter, Meredith West, to Andrew Baker, son of Robert and Linda Baker of Overland Park, KS. The future bride is a 2006 graduate of Lawrence High School and 2010 graduate of Emporia State University with a degree in Business Administration. She is currently employed by Frisco Independent School District. The future groom is a 2002 graduate of Blue Valley Northwest and 2007 graduate from the University of Kansas with a degree in Journalism. He formerly worked at 6News Television in Lawrence as a Sports Reporter/Anchor. He currently is employed at Travelers Insurance. The couple resides in Dallas, TX. They are planning a September 2018 wedding.