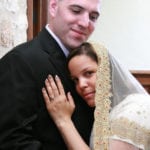 Katherine Williams, Waco, Texas, and Jeremiah Shaw, Elizabeth, Colo., were married May 2, 2009, at Danforth Chapel at Kansas University, with Judge Robert Fairchild officiating.
The bride is the daughter of Algen Williams, Lawrence, and Beth Lancaster, Vallejo, Calif.
The groom is the son of Kevin Shaw, Laramie, Wyo., and Betsy Wilson, Elizabeth, Colo.
Maids of honor were Ollie Wenger and Sowjanya Seetala. Best men were Ken Apple and David Hardy. Ringbearer was Mason Williams. Flower girls were Mikyla Williams and Alexis Williams. Ushers were Algen Williams Jr. and Tiffany Fuller. Nickolas Passmore, son of the bride, and Wyatt Shaw, son of the groom, were presented medallions by the couple during the ceremony.
A reception was given at the EconoLodge, Lawrence.
The bride is a 1993 graduate of Leavenworth High School and attended Kansas University. She is the webmaster for Douglas County.
The groom is a 1996 graduate of Elizabeth (Colo.) High School, and attended Mesa State College, Grand Junction, Colo. He is a deputy in the Douglas County Sheriff’s Department.
The couple reside near Perry Lake.