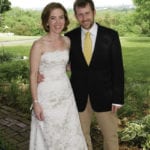 Mary Gower Hill and William Allen Bryan Patten, both of Washington, D.C., were married May 24, 2009, at the home of bride’s parents in Lawrence, with the Rev. Ed Snow officiating.
The bride is the daughter of Stephen and Marcia Hill.
The groom is the son of Bryan and Kathy Patten, Lookout Mountain, Ga.
Matrons of honor were Julie Ketover and Jennifer Yang Weedn. Best man was Daxter Holder. Bridesmaids were Emily Hill, Sarah Hill-Nelson, Kathleen Patten, Sarah Patten, Cara Nossaman Anderson and Dune Lawrence. Groomsmen were Bryan Wheelock, William Montgomery, Matthew Scott, Ben Rodriguez, Rustan Adcock, Ben O’Connell and Zachary Bruns. Flower girls were Hilary Griggs and Oona Nelson. Ringbearers were Mancel Adcock, Hugh Griggs, Lyle Griggs and Henry Nelson. Readers were Vanessa Hill Johnson and Jennifer Neal. Guestbook attendant was Jami Wyatt.
A reception followed at the home of the bride’s parents.
The bride is a 1992 graduate of The Barstow School, Kansas City, Mo., and earned a Bachelor of Arts degree in history from Yale University in 1996, and a Master of Business Administration degree from the University of Virginia in 2001. She is the vice-president of finance at Revolution Places, Washington, D.C.
The groom is a 1992 graduate of The Baylor School, Chattanooga, Tenn., and earned a Bachelor of Arts degree in economics from Yale University in 1996, and a Master of Arts degree in education policy and a Master of Business Administration degree, both from Stanford University in 2003. He is the chief financial officer of Cesar Chavez Public Charter Schools, Washington, D.C.
The couple reside in Washington, D.C.