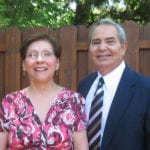 Andy and Helen Martinez, Lawrence, will celebrate their 50th wedding anniversary today with family.
Andy Martinez and Helen Chavez were married on June 27, 1959, at St. John the Evangelist Catholic Church in Lawrence.
Andy graduated from Ottawa High School in 1955. He moved to Lawrence in 1957 and entered the plumbing trade. Andy has worked for several different plumbing companies and served on the Lawrence plumbing board. In 1974, he started his own business, Martinez Plumbing Service, in Lawrence, which he still operates today. Helen graduated from Lawrence High School in 1959. She has worked for the Kansas University Extension Center. Helen is a homemaker and also manages the Martinez Plumbing office.
They have four sons, David and wife Theresa, Paul and James, all of Lawrence, and Steve, Manhattan; a daughter, Angela Minor and husband Glenn, Lawrence; and five grandchildren.