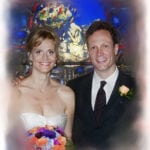 Nealy Anne Vicker, Newport Beach, Calif., and Jason Scott Johnston, Philadelphia, were married May 8, 2009, at Danforth Chapel at Kansas University, with the Rev. Gary W. Teske officiating.
The bride is the daughter of Gary and Sonja Vicker, Lawrence.
The groom is the son of Richard Johnston, Irons, Mich., and the late Rita Johnston.
Maid of honor was Paige Butler. Best man was Henry Butler. Flower girl was Gabby Yoder. Ringbearer was Griffin Akins.
A reception was given at The Castle Tea Room.
The bride earned a Bachelor of Arts degree from the University of Colorado, Boulder, a Master of Science degree from the University of Nebraska-Omaha, and a Ph.D. from the University of Nebraska-Lincoln. She owned and operated Ellipse, Inc., an education and career exploration consulting company in Newport Beach, Calif.
The groom earned a Bachelor of Arts degree from Dartmouth, and a Juris Doctorate and a Doctor of Philosophy degrees, both from the University of Michigan. He is the Robert G. Fuller, Jr. Professor of Law and director of the Program on Law, the Environment and the Economy at the University of Pennsylvania Law School.
The couple reside in Philadelphia.