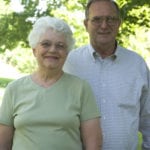 Bill and Mary Lou Hamlin, Eudora, will celebrate their 50th wedding anniversary with a 5 p.m. Mass today at the Holy Family Catholic Church of Eudora followed by a reception in the parish hall.
William Hamlin and Mary Lou Van Norman were married on June 27, 1959, in Tomahawk, Wis.
The couple moved to Eudora in 1972 from Tomahawk, after Bill was transferred to the Lawrence Wickes Lumber Yard in North Lawrence. He worked in the building construction field until 2006, when he retired from Neighbor’s Construction Company. Mary Lou was a buyer for Weaver’s Department Store from 1973 to 1993. She works part-time at the Kansas City Gift Mart in Overland Park. They have been members of the Holy Family Catholic Church of Eudora since moving from Wisconsin.
They have two daughters, Kim, Wichita, and Teri, Linwood; two sons, Scot, Eudora, and Steve, Towanda; eight grandchildren; and three great-grandchildren.
The couple requests no gifts.