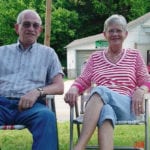 Richard and Pat Rinke, Lawrence, will celebrate their 50th wedding anniversary with a private dinner this weekend.
The couple were married June 20, 1959, at the Holy Family Church in Eudora.
Richard worked for KP&L a few years prior to becoming an insurance agent for over 30 years. He also served as a long-time usher at Kansas University’s football and basketball games. Pat worked at TG&Y and K-Mart before becoming a homemaker and baby-sitter for her grandchildren.
They have two daughters, Kimberli Arndt and husband Mark, and Kristi Jorgensen and husband Dane; a son, Michael and wife Amy, all of Lawrence; and seven grandchildren.