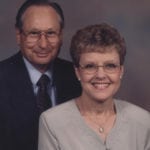 Norman and Marjorie Brammell, Lawrence, will celebrate their 50th wedding anniversary June 27 with an open house from 1:30 p.m. to 4:30 p.m. at First United Methodist Church West Campus, 867 U.S. Highway 40, in Lawrence.
The couple were married July 1, 1959, at the United Methodist Church in Oskaloosa.
Norman taught high school for 30 years in Wellsville. Marjorie worked at the post office in Wellsville for 22 years before owning and operating Merle Norman Cosmetics in Lawrence for 14 years. They are both retired and live in Lawrence.
They have two daughters, Marianne Lyon and husband Larry, Chaska, Minn., and Sonja Merino and husband Fred, Olathe; and five grandchildren.