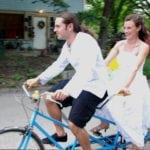 The bride is the daughter of Dean Constantine Palos and Diana Palos, both of Lawrence.

Maid of honor was Anna Jackson.

A reception followed in their backyard.

The bride is a graduate of Kansas University and Massage Therapy Training Institute. She is a massage therapist at Kinetikos in Lawrence.

The groom is self-employed at Shiney Independent, a local custom screen printing business.

The couple reside in Lawrence.