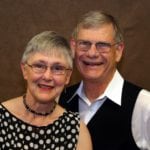 Lee and Carolyn Carlson, Lawrence, will celebrate their 50th wedding anniversary in Grand Lake, Colo., with family later this month.