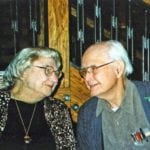 Janney and Arthur Burgess, Lawrence, celebrated their 65th wedding anniversary with a family dinner in February.

Arthur practiced family medicine in Oswego for 32 years. Janney worked in her husband’s office and at Oswego Hospital and taught registered nursing at Labette Community College. The couple retired in 1985 and moved to Lawrence in 1992. She was nominated in 2004 and 2008 for the Roger Hill Center’s Wallace Galluzzi Outstanding Adult Volunteer Award for her volunteer work with Douglas County Visiting Nurses, Rehabilitation and Hospice Care. She also serves on the Lawrence Interdenominational Nutrition Kitchen board and the Unitarian Fellowship’s Social Action committee. The couple are volunteers for LINK and are members of the Unitarian Fellowship, Kansas Health Care For All, Coalition for Homeless Concerns, Older Women’s League and Lawrence Flower Club.