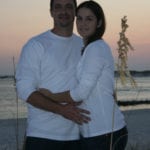 Lyjah White, Oskaloosa, and Jason Heddy, Pensacola, Fla., announce their engagement.
The future bride is the daughter of Gary White, Oskaloosa, and Sandra White, Lawrence. She graduated from Oskaloosa High School and attended Dodge City Community College before entering the military as an air traffic controller. She plans to earn a bachelor’s degree in human resource management from Thomas Edison State College in December.
The future groom is the son of Joe and Jill Heddy, Pensacola. He graduated from Washington High School, in Pensacola, and earned bachelor’s and master’s degrees from University of West Florida. He is a senior contracting officer for the government at General Service Administration.
The couple plan a Sept. 12, 2009, wedding at Danforth Chapel at Kansas University.