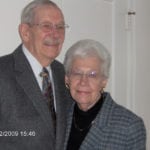 Ken and Rowena Pine, Lawrence, celebrated their 60th wedding anniversary July 1. A dinner at the WeatherVane in Charleviox, Mich., was attended by relatives from Texas, Maryland, Illinois, Kansas and Michigan.
Ken Pine and Rowena Nehrbass were married Jan. 28, 1949, at Centenary Methodist Church in Lawrence.
After Ken’s combat service in Europe during World War II, he graduated from the School of Business at Kansas University. A few years with J.C. Penney were followed by 27 years with Met Life. His retirement jobs were with Mallott and Roach Hardware.
Rowena worked for First United Methodist Church, in Lawrence, for 33 years, in several capacities after attending Baker University and KU. In 1981, she was considered diaconal minister after completing seminary course work. Upon retiring from the church, she served as chaplain for Lawrence Presbyterian Manor for eight years.
The have one daughter, Penny Hemphill and husband Charles, Lawrence, and two grandchildren.