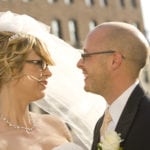 Louise Stauffer, Holland, Mich., and Nick Krug, St. Charles, Mo., were married June 6, 2009, at The Eldridge Hotel, with Michael Lynn, uncle of the bride, officiating.
The bride is the daughter of Clay Stauffer and Barbara Griffin, Holland, Mich., and Susan Lynn and Brian Wolfe, Iola.
The groom is the son of Veronica Krug, St. Charles, Mo., and the late Bruce Krug.
Maid of honor was Kelly Schetzsle. Best man was Caleb Krug. Bridesmaids were Kelly Alexejun, Dana Bremner, Lindsay Metcalf and Corie Dugas. Groomsmen were Tim Stauffer, Aaron Stauffer, Thad Allender and Jake Harrell. Usher was John Nowak. Flower girls were Audrey Lynn, Maris Lynn and Sidney Thornton.
A reception followed at The Eldridge Hotel.
The bride graduated from West Ottawa High School and earned a bachelor’s degree in journalism and an master’s degree in creative writing, both from Kansas University. She will begin pursuing a doctorate in creative writing in August from KU and is a graduate teaching assistant at the university.
The groom graduated from Duchesne High School, earned a bachelor’s degree in journalism from KU, and is a photographer at the Lawrence Journal-World.
The couple reside in Lawrence.