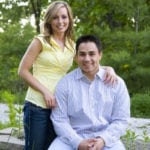 Darrel and LaRita Claassen, Newton, announce the engagement of their daughter, Brittany Claassen, to Jacob Sacks, both of Lawrence.
The future bride is a 2003 graduate of Newton High School and earned bachelor’s and master’s degrees in accounting from Kansas University in 2007 and 2008. She is a tax accountant at Marks Nelson CPA in Overland Park.
The future groom is the son of Sony Sacks, Newton, and the late Gregory Sacks. He is a 2003 graduate of Newton High and earned a bachelor’s degree in sports management from KU in 2007. He is studying for a Master of Business Administration degree from Baker University. He is the Internet sales manager at Crown Toyota and an assistant basketball coach at Haskell Indian Nations University, both in Lawrence.
The couple plan an August 2009 wedding at Corpus Christi Catholic Church in Lawrence.