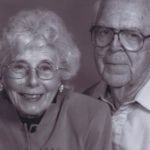 James and Mildred Cooper, Lawrence, celebrated their 65th wedding anniversary July 5 with a family gathering at their son Brian’s home in Shawnee.
The couple were married July 2, 1944, at First Presbyterian Church in Lawrence.
James was a pilot in the U.S. Army Air Corps during World War II. He attended Kansas University and worked at Kansas Power and Light/Westar for 37 years. Mildred also attended KU and is a homemaker. She is active at Plymouth Congregational Church.
They have two sons, Gary and wife Betty Jo Switz, Alburquerque, N.M.; and Brian, Shawnee; and a daughter, Rosie Shelton and husband Charlie, Lawrence; and two grandchildren.