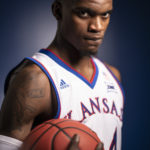 While Saturday’s regular season finale against Baylor at Allen Fieldhouse will be the rare season-ender without a celebration of KU’s seniors, Kansas coach Bill Self took time in the days leading up to it to reflect on the lone senior on his 2018-19 roster.

Because a leave of absence took him back to his hometown of Memphis to tend to some personal matters four weeks ago, Lagerald Vick will not be in the building on Saturday.

It will mark just the second time in KU’s streak of 35 consecutive Senior Day victories — which started under Larry Brown in 1983-84 — that the Jayhawks will not have a senior address the home crowd. The 2006-07 season also finished without a single senior speech given at KU.

But Vick, with his play, did plenty to connect with the fans at Allen Fieldhouse over a 60-game span during his 3-plus year KU career. His record in KU’s home gym during that stretch, which includes a 12-0 mark this season, was 56-4 and many of those victories helped lead Kansas to three Big 12 regular season titles.

“People should remember Lagerald in a very favorable way,” Self said Thursday at his regular weekly press conference. “No question. We won three (league titles) and won 10 games in the NCAA Tournament in (his first) three years. You know, there’s not too many players out there in the country who can say that. And he’s played a role in that and, certainly, he got better over time.”

Vick and the Jayhawks appeared to be on their way toward making it a fourth Big 12 title in four years — along with who knows what else — when they raced out to a 10-0 start to Vick’s senior season, with the 6-foot-5 guard leading the Big 12 in 3-point shooting and topping 27 points in four of the season’s first nine games.

Since then, however, the Jayhawks are just 12-8 overall and Vick has missed the past seven games because of his leave of absence. Kansas is 5-2 in those seven games without Vick and the Jayhawks have found a new way to play without him.

But those on the team who know him best said his absence on a day that should have belonged to him will make for a weird setting on Saturday.

“Lagerald’s a great friend of mine,” junior forward Mitch Lightfoot said. “I’ve known him for a while. He was kind of helpful for me when I got here, kind of showing me the ropes a little bit. We all know how much he means to us and how much he gave to the program and we’re real appreciative of him and we’re sad he can’t be here.”

As for whether the absence of the Senior Day vibe — fans throwing flowers before the game, a speech and ceremony afterwards — will make Saturday’s 1 p.m. tipoff with Baylor seem more like any other regular season home game, Lightfoot admitted it would be different.

“We don’t get to have that senior speech that we (usually) have,” he said. “We’ve had some pretty good ones lately. Lando (Landen Lucas) and Frank (Mason), Devonte’ (Graham) and Svi (Mykhailiuk). Clay (Young). Tyler (Self). We’ve had some pretty good ones. So it’ll be different. It’s always a pretty emotional night, so I’m looking forward to seeing what the mood is and seeing the energy.”

Making matters even more interesting is the fact that Saturday’s finale falls during spring break and there’s a chance that Allen Fieldhouse will not have nearly as many KU students filling the student section as it typically does.

In thinking back on Vick’s career, which spanned 117 games in all, Self recalled a player who exceeded his ceiling.

To this point, the athletic and entertaining guard has posted career averages of 9.4 points and 3.5 rebounds on 40.5 percent shooting from 3-point range while becoming the 61st Jayhawk to eclipse the 1,000-point mark for his career.

While away from the team, Vick has continued to take care of his academic responsibilities and next week is expected to complete an 8-week online class that was one of two classes he needed for graduation on his schedule for the spring semester.

Such a schedule is set up well in advance for many of KU’s basketball players so they have as light a load as possible heading into March Madness.

Although he will not walk down KU’s famed campanile hill at graduation until May, Vick’s ability to complete the requirements for his liberal arts degree will make him the first male in his family to graduate from college.

That accomplishment, as much as the clutch 3-pointers, the 360-degree dunk against Purdue in the 2017 NCAA Tournament or the wild and crazy sense of humor and style that Vick brought to practice and games throughout his time as a Jayhawk, is something that means a lot to Self, as well.

“He’s going through some stuff right now,” Self said this week, noting that he and Vick recently spoke. “I think he’s doing well and I think it’s good that he was able to take care of that and address it and he’s working through whatever personal things that he’s got going. I’m excited for him to be better, (whatever) that better is, and for him to take this as a foundation to still go on and do great things after he leaves here.”

As for whether there remained even the slightest chance that Vick still could return to the team before the end of the season, Self said the door was not closed completely.

“Considering the late date, you know, we’re going on a month (of him being away from the team), so there’s not a lot of time to come back and we’re pretty set in what we’re doing,” Self said. “But I’m not going to make that decision right now, today, because I don’t know. But I would say, with each passing day, it’s less likely.”