TOPEKA — Kansas reported Monday that another record coronavirus spike pushed the state past 20,000 total cases for the pandemic, shadowing plans for reopening public K-12 schools just a month before fall classes are set to begin.

The state Department of Health and Environment said that Kansas had another 1,447 coronavirus cases since Friday, an increase of 7.8%, to bring the total for the pandemic to 20,058. The number of infections is thought to be far higher because many people have not been tested, and people can be infected without feeling sick.

Kansas reported an average of 451 new coronavirus cases a day during the seven-day period ending Monday, the worst seven-day average yet. That figure has climbed each of the seven times the department has reported new data starting on June 29.

The health department also reported four additional COVID-19-related deaths making its reported total for the pandemic 288, a 1.4% increase. However, Johns Hopkins University put the state’s number of deaths at 297.

Kansas saw its growth in reported coronavirus cases bottom out five weeks ago, before beginning to climb again, according to an AP analysis of data from The COVID Tracking Project. Kansas schools typically open by mid-August for the fall.

“We just understand the importance of getting kids back, and if that’s at all possible, we’ve got to plan for that,” said Ron Wilson, the superintendent of schools in Hays, where classes are set to resume Aug. 13. “Ultimately, I think public health officials will probably be making calls in terms of whether our schools should be open or not, and I think they’re going to be basing that on science.”

Democratic Gov. Laura Kelly issued an order July 2 directing the state’s residents to wear masks in public and at their workplaces. She said as she issued the order that if Kansas didn’t get its resurgence of new reported coronavirus cases under control, public schools for 519,000 K-12 students might not be able to reopen safely.

But state law allows counties to opt out of the mask mandate. Most have, exempting about 40% of the state’s population, according to The Wichita Eagle.

“The benefits of the statewide mask mandate will remain unknown because of the patchwork quilt of counties that adopted it,” Dr. Lee Norman, the health department’s top administrator, said in a statement texted to The Associated Press.

The State Board of Education plans to meet Tuesday to review proposed guidelines for reopening schools and to vote on them Wednesday.

Local districts also have been working for weeks on their own plans. The Shawnee Heights district east of Topeka, has had a task force discussing reopening issues since June and hopes to have its plan ready next week.

Local school board President Lauren Tice Miller said one key issue is predicting how much time parents might need to prepare for whatever the district plans. The district plans to start fall classes Aug. 13, but it’s still possibly too early to make final decisions about how to reopen, she said.

“There’s still just a lot of uncertainty,” she said. “We all want to bring our kids back and our teachers back, but we have to be able to do it safely.”

During the past two weeks, the Kansas health department has reported 5,615 new coronavirus cases, an increase of 39%. Reported COVID-19-related deaths and hospitalizations have risen more slowly, 6.7% for deaths and 16.6% for hospitalizations, which totaled 1,343 as of Monday.

The Kansas State Fair’s board canceled the annual event in Hutchinson, which had been set for September.

Twenty-eight of the state’s 105 counties have seen reported coronavirus cases at least double in the past two weeks. They include Ellis County, home to the Hays school district, where reported cases rose from 21 to 57 over the two weeks, and Saline County, where cases jumped from 94 to 220.

The Salina school district in Saline County plans to start online enrollment Tuesday and is giving parents the option of choosing online classes. Superintendent Linn Exline said the possibilities for the new semester include having some students attend in-person classes Monday and Tuesday and others, Wednesday and Thursday, with remote teaching Fridays. Its first classes start Aug. 11.

“What we are really working on is to develop plans where we limit risk as much as possible,” she said. “There is no such thing as a risk-free environment. That’s true any day of the week.” 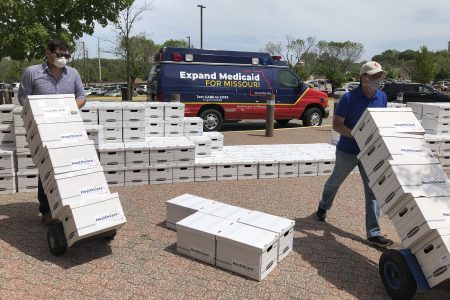