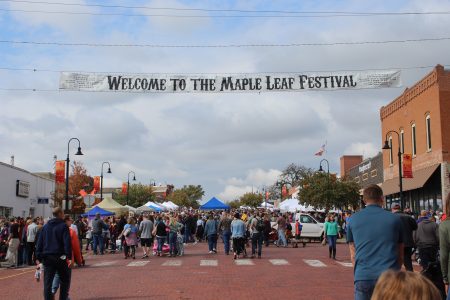 A banner marks the entrance to the Maple Leaf Festival on Saturday, Oct. 19, 2019 in Baldwin City.

Because of the recent spike in COVID-19 cases, the annual Baldwin City Maple Leaf Festival has been canceled for this year.

Mike Curran, Maple Leaf Festival Committee chairman, said the committee last week voted to call off the festival, which annually draws more than 30,000 visitors to Baldwin City during its two-day run. This year’s festival was scheduled for Oct. 17-18.

Curran told the Journal-World last month that the festival committee would make a Sept. 1 decision about this year’s festival, but did say an earlier decision was possible if conditions warranted.

Curran said Sunday that the decision to cancel was made in light of the alarming spread of the pandemic in recent weeks.

“The numbers of cases aren’t going down,” he said. “Cases in the Kansas City area are increasing sharply. All it takes is one person with no symptoms to infect the community.”

With just three and a half months to plan the festival, there were too many unanswered questions, including whether Gov. Laura Kelly would allow a gathering the size of the festival, Curran said.

Nonetheless, it was a tough decision because of the festival’s financial importance to many in the community, Curran said. The festival committee hires the Baldwin City Boy Scouts and various Baker University groups to help with the festival, and other civic, church and Baker groups raise money from food booths during the weekend.

The cancellation will also affect vendors and local businesses who benefit from the influx of visitors.

“For many of our vendors, this represents their supplemental retirement income,” Curran said. “It’s also a very big weekend for our restaurants. But in the end, we had to weigh all that against public safety.”

The committee will start notifying vendors this week, Curran said. Those who have already registered and paid a booth space fee will be given the option of a refund or using the fee for the 2021 festival, he said.

To help vendors, the committee is planning to host a free virtual festival on its website, mapleleaffestival.com, Curran said. All vendors will be listed on the site with a link to their websites from which customers can order products.

“We’re going to do that free for all our vendors,” he said. “We’re also are going to have a virtual parade with the grand marshal and our Baldwin High School scholarship winners.”