Plans for major shopping center at SLT and Iowa Street get boost, but motorists may have to get used to new stoplight 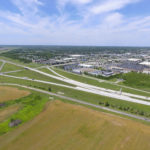 An area just southeast of the intersection of the South Lawrence Trafficway and Iowa Street is being proposed as the site for a large-scale shopping center by the North Carolina-based Collett Company, which is currently suing the Lawrence City Commission for denying a previous request for development of the property.

Thanks to a stoplight, plans are once again moving ahead for a major new shopping center at the interchange of the South Lawrence Trafficway and Iowa Street.

Developers have filed a new set of plans with City Hall to build a shopping center on the southeast corner of the interchange that could house up to eight big retailers, a couple of hotels and more than a half-dozen restaurants and other smaller businesses. In the past the developers have said Academy Sports, Designer Shoe Warehouse, Old Navy, a natural foods grocer and other national retailers have shown strong interest in the project.

North Carolina-based real estate firm Collett has been working to develop a shopping center at the interchange since 2014. It has had previous plans rejected by city commissioners, but after Collett sued the city over a 2016 rejection of the project, talks continued between the two parties. A new plan — actually larger than the one the city rejected — was filed in mid-2017. That plan, though, has never had a hearing before the Planning Commission or the City Commission, largely because the Kansas Department of Transportation had expressed concerns about highway access for the development.

The latest filing with City Hall, though, indicates those access issues have been resolved with KDOT. Some motorists may not be thrilled with the solution: two stoplights within about 300 feet of each other. The plan calls for a stoplight to be installed at the current intersection of U.S. Highway 59 and North 1250 Road, which is the narrow frontage road about 300 feet south of the eastbound entrance ramp for the SLT.

“Since we last submitted a plan last year, everything has really been about talking things through with KDOT,” said Sturm, a senior landscape architect with Olathe-based Landworks Studio. “We had a bit of a breakthrough over the summer.”

That breakthrough will involve a new interchange that looks significantly different from what exists today. The existing eastbound entrance ramp would be removed once the western leg of the SLT is expanded to four lanes. That is the ramp that is closest to the proposed shopping center. It would be replaced with a new looping ramp that actually would be on the west side of U.S. 59. That means northbound motorists on U.S. 59 who want to exit and go east on the SLT would need to turn left at the new stoplight and take a new ramp that loops back over U.S. 59 via a bridge. Here’s a look at the plans: 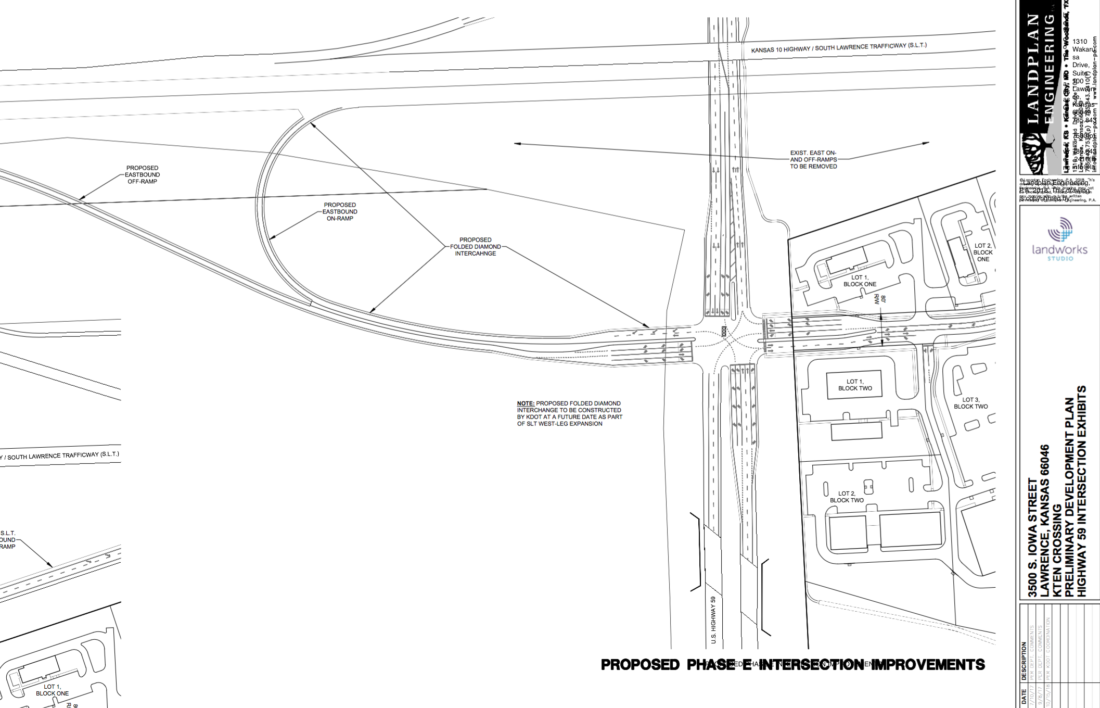 Plans submitted to the city of Lawrence show how a future interchange could be built at the intersection of the South Lawrence Trafficway and U.S. Highway 59, which is also Iowa Street.

Sturm said the plans show KDOT’s confidence that the western leg of the SLT is going to be expanded to four lanes.

“They are still happy to state the west leg expansion is absolutely going to happen,” Sturm said. “They won’t give you a firm timeline on when it will occur, but they are well underway with some permitting and design processes.”

Sturm said the expansion of the west leg was going to require a redesign of the intersection regardless, and the breakthrough came this summer when designers started looking at ways the interchange could best accommodate commercial development on the south side of the SLT. Sturm said Collett officials believe the proposed shopping center can gain some real momentum now that there is general agreement on the access issues.

“They are really thankful for the attention and consideration that KDOT has given this project over the last year,” Sturm said. “They continue to be very bullish about this project and its ability to bring new retail tenants to the Lawrence community.”

As for the retail plans, they would result in one of the largest shopping centers in Lawrence, likely surpassing the Pine Ridge Plaza development that houses Kohl’s, Bed Bath & Beyond and others.

The plans call for about 600,000 square feet of retail, restaurant, gas station and hotel space on the property, which would have parking for more than 2,500 vehicles. Plans call for the project to be developed in phases, beginning in 2020 and ending as late as 2027.

Collett officials previously have said they think the project can do much to slow the number of Lawrence residents who are leaving the community to shop, especially in the category of clothing and accessories.

Collett officials previously had publicly listed several retailers who said they wanted to locate in the development. Indeed, several of them have already come to Lawrence in the three-plus years since the shopping center was first proposed. Those include Ulta Beauty and HomeGoods, but other retailers that previously have been mentioned by developers but have not yet located in Lawrence include Academy Sports, Designer Shoe Warehouse and Old Navy.

As drawn, the plans would have plenty of room for those retailers and others. The drawings, which are subject to change as developers begin working with specific tenants, show seven “general retail” buildings ranging in size from about 136,000 square feet to 7,200 square feet. In addition, plans show one 21,000-square-foot building specifically designated for “food and beverage retail sales.”

The plans also show spaces for at least four full-service restaurants, four fast-food restaurants, and a 5,000-square-foot convenience store with gas pumps. Later phases of the project also show sites for two hotels that could have about 240 rooms in total.

Developers hope to have a hearing at the Lawrence-Douglas County Planning Commission in December, which could mean the project would go before city commissioners in mid-January. The project needs various zoning and planning approvals from both groups before it can begin.

I’ve got a call into the development group. I’ll let you know if I learn any new information about tenant plans.