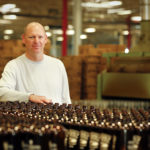 In this file photo from October 2013, former University of Kansas basketball player Chris Piper is pictured at his business, Grandstand Glassware and Apparel, in the East Hills Business Park.

Needing more space for beer glasses and T-shirts is usually considered a problem at my house, but it is a sign of booming business for one Lawrence manufacturer.

Grandstand Glassware & Apparel has plans for an approximately $5 million expansion at its East Hills Business Park location. As part of the deal, the company is seeking a property tax break from the city, and commissioners will begin the process of considering that request on Tuesday.

Officially, the company is projecting that the warehouse expansion will add 50 jobs over the next 10 years, but Grandstand President Chris Piper said he was being conservative with the projection.

“We have added 150 jobs over the last five years,” Piper noted.

The company now has about 220 full-time employees, and an annual payroll of about $9 million, according to figures presented to the city.

If you aren’t familiar with Grandstand, that probably is because you are not in the brewery business. Grandstand has become one of the leading promotion companies for the microbrewery industry. Specifically, it sells all types of glassware with custom logos, plus a variety of apparel items that also are customized with a company’s brand.

The company is located in the former Sauer-Danfoss building in the East Hills Business Park at 3840 Greenway Circle. In 2011, the company converted the former hydrostatic transmission plant into production space for digital and screen printing operations. Now, the company plans to add an approximately 115,000-square-foot warehouse addition onto the south end of the building. 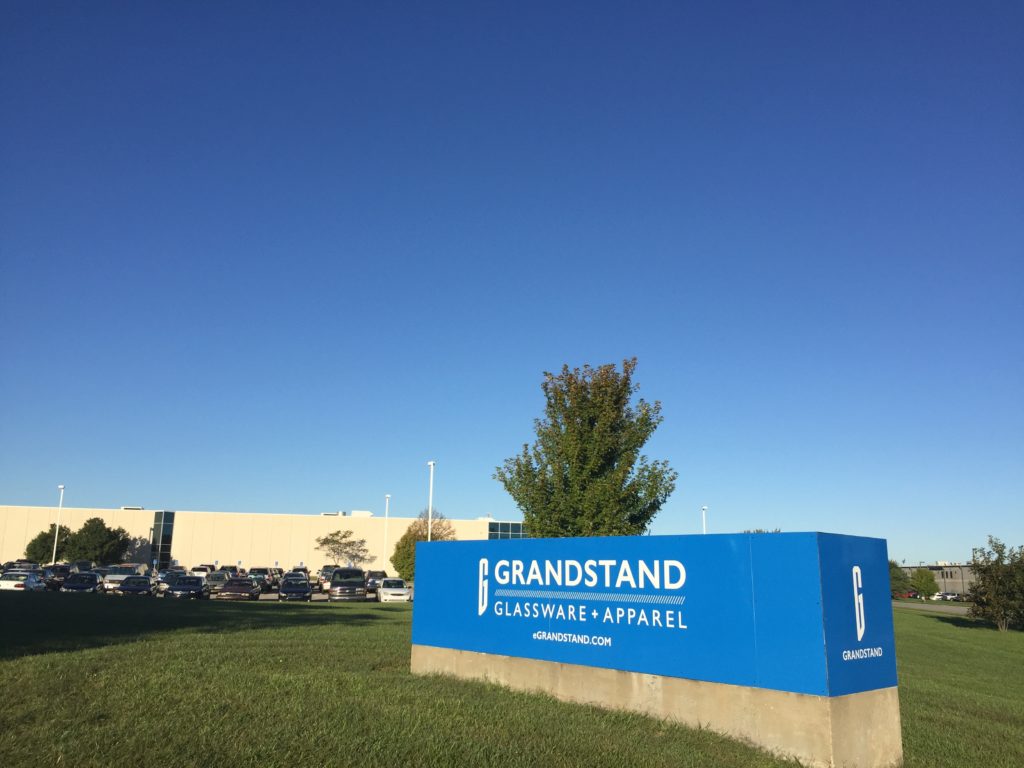 The warehouse addition will allow the company to free up production space that currently is being used for product storage. Piper said the company is preparing for what he thinks will be an expanded market interested in glass. He sees a day where plastic cups will see more limited use in the U.S.

“The world is really starting to become concerned about plastic,” Piper said. “I just got back from Germany and was amazed at how there is no plastic over there.”

In addition, the company has started its own in-house promotions agency — 88 Design Group — that focuses on serving the craft beer industry. (Thus its slogan: “We work for beer.”) As the craft beer industry continues to become more promotional, that is expected to do good things for the company’s apparel business and other printing operations. In addition to the traditional screen printing process, the company has added digital printing technology, which allows it to put logos and branding on a variety of products.

“On digital, we pretty much can reproduce anything,” Piper said.

In addition to the brewery market, the company is growing its number of university and corporate accounts that need everything from polo shirts for the company picnic to a full line of promotional products, Piper said.

If Piper’s name sounds familiar, he indeed is the former Lawrence High basketball standout who went on to become part of KU’s 1988 National Championship team. Piper started the company that became Grandstand shortly after the 1988 season, when his business model was to print T-shirts for KU’s Late Night in the Phog event.

The company got into glassware because, as Piper put it, “everybody and his brother had a T-shirt shop.”

The company found a niche in the craft brewing industry, and the growth has even surprised Piper.

“It has been a lot faster than we expected,” Piper said. “When we moved into this big building, I never could have predicted that we would ever need more space.”

As for a timeline, Piper hopes to have the new warehouse spaces completed by the beginning of October 2019. Getting the tax abatement from the city, however, is a key part of the process.

He is seeking a 50 percent tax abatement for 10 years, although the project could qualify for a 70 percent abatement if the building is constructed to certain energy efficiency standards.

At their Tuesday evening meeting, commissioners are being asked to formally accept the application for the tax incentive, and declare that the project is eligible for the city’s Catalyst program, which makes it eligible for a fast-track review process. If put on the fast-track, city commissioners would consider final approval for the property tax abatement at its Nov. 20 meeting.

• One other project that was part of the Catalyst program is reaching a critical juncture. The approximately 150,000-square-foot building that is under construction in Lawrence’s VenturePark development near 23rd Street and O’Connell Road is basically completed.

The building, if you remember, was built on speculation, meaning the Kansas City developer didn’t have a tenant for the building. The building still doesn’t have a tenant lined up, but the project is getting its tax abatement finalized this week by the City Commission.

Like the Grandstand project, the building was eligible for either a 10-year, 50 percent property tax abatement or a 10-year, 70 percent abatement if the project was built to certain energy efficiency standards.

The city has determined the project is eligible for the 70 percent abatement. To get the 70 percent abatement, the city requires projects to be built to a LEED Silver standard. The city doesn’t actually require the building to go through the LEED certification process, which can be time consuming and costly. Rather, the city requires design documents that show the project was built to a LEED standard.

Based on figures provided to the commission, the tax abatement will save the company about $3 million in property tax payments over the next 10 years. But since the land was previously vacant, the 30 percent in property taxes the company is required to pay will generate about $885,000 in new property taxes over the 10-year period. In addition, the Kansas City development company VanTrust Real Estate will be responsible for paying the special assessments that were levied against the property to pay for roads, sewer and other infrastructure in Lawrence VenturePark. Those payments total about $865,000 over the next several years. Currently, local governments have been making those payments.

• City commissioners also are scheduled to approve one other smaller economic development incentive. Heritage Tractor is scheduled to receive a tax exemption that will allow them to buy construction materials for their new dealership on 23rd Street without paying sales taxes on the materials. Heritage is rebuilding a 22,000-square-foot John Deere dealership at 1110 E. 23rd St. after its previous building was destroyed by fire.

If approved, the exemption would save the company about $135,000 in sales taxes that it otherwise would have to pay for the construction materials, according to figures provided to city commissioners. About $100,000 of those sales taxes would have been due to the state of Kansas, while the rest would have gone to the city and the county.