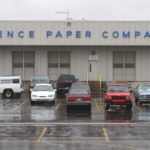 President Donald Trump doesn’t have his portrait on any U.S. currency — yet — but about 200 Lawrence employees have $500 that basically is courtesy of Trump and his fellow Republicans. So says Justin Hill Jr., president of the Lawrence Paper Company. The maker of cardboard boxes gave all of its employees a $500 bonus, and Hill said it absolutely is the result of the Republican-led tax cuts.

Hill went to the company’s three plants — Lawrence, Hutchinson and Fremont, Neb. — to deliver the news that each employee would receive a $500 bonus this week. He said the tax cut recently passed by Congress and signed by Trump spurred him to do so.

As elections every two years seem to confirm, Lawrence is not a big Republican town. (Trump received only 28 percent of the vote in Douglas County.) But Hill told me the news of $500 bonuses was well-received by all.

“For some strange reason, they all liked that,” Hill said.

Hill is convinced the tax cuts — which include cuts for individuals, but also a cut to the corporate tax rate — is going to result in an increase in business for his box-making company.

“I think the outlook for the economy is very positive,” Hill said. “We tend to grow in step with the economy.”

Critics of the tax cuts do not agree with his outlook. While some concede the economy may see a boost, others contend that most of the benefits accrued go to the wealthiest, and there is no guarantee that the wealthy will spend more money simply because they have more money.

I’ll leave that debate to others, but Hill said his company is spending money as a result of the tax cuts. In addition to the bonuses — there were 300 of them companywide — he’s also announced a $9 million expansion project. Before local economic development leaders get too excited, the expansion is at the company’s Fremont, Neb. plant. The company plans to build a 60,000-square-foot addition to the plant and invest about $5 million in new equipment.

Hill told me the Nebraska plant was chosen for the expansion because it is near capacity and the Nebraska location made the most sense to serve some of its customers. But Hill said he thinks expansion at the Lawrence and Hutchinson plants are possible, if the economy grows like he thinks it will. (He thinks the economy will grow at an additional 1 percent to 2 percent a year because of the tax cuts.)

In the meantime, Hill said the company has added about six employees to the Lawrence plant, as it adds a second shift on some machines to compensate for an uptick in customer orders.

And, yes, Hill has made a conscious decision to tout what he is doing. Lawrence Paper Company, while one of the oldest businesses in Lawrence, usually isn’t very public with its affairs. But Hill had the Kansas Chamber of Commerce send out word of the bonuses, with special emphasis on the role that the tax cut bill played in his decision.

Plus, Hill is going to soon take his story national. He told me he is scheduled to be interviewed Monday by Stuart Varney on the Fox Business Network.

“We are just very excited about what this (tax cut) is going to do for the economy,” Hill said. “We thought if we got a chance to generate some excitement and get other people thinking about doing what we’ve done, get them thinking about making an investment, then we should do it. And, thus far, it has been a lot of fun.”