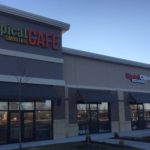 Tropical Smoothie Cafe plans to open in early January 2019 in the shopping center at 27th and Iowa streets that includes Buffalo Wild Wings and other businesses.

I may get a lump of coal in my stocking (maybe that is what people mean when they say coal is making a comeback), but at least I soon could have a Blimey Limey in my stomach. South Iowa Street soon will be home to a new smoothie franchise that will feature all types of island concoctions.

Tropical Smoothie Cafe is opening its first Lawrence location at 27th and Iowa streets in the shopping center that includes Buffalo Wild Wings. Look for the shop to open in early January, said Aaron Walker, who owns the franchise along with wife, Andra Walker.

As for what to expect once the restaurant opens, the menu will feature lots of smoothies, sandwiches, wraps and other items with a Florida beach feel. The company got its start in Destin, Fla., in the 1990s.

“I think what will set us apart is our atmosphere,” Aaron said. “We’ll have a beach house feel and theme.”

Look for concoctions like the Blimey Limey, which is a smoothie that features strawberry, pineapple, orange juice and lime. Also on the menu is a nonalcoholic version of a Bahama Mama, and beach-inspired fruit smoothies like Paradise Point, Sunrise Sunset and Mango Magic.

Another part of the menu includes superfood smoothies that use various ingredients that have been touted to contain antioxidants or have other specific health benefits. Those include pomegranate, ginger, oats, avocado, chia and a whole bunch of leafy vegetables that are trying to distance themselves from bad-boy cousin romaine. (Yes, 20 years from now I’ll still be heeding the FDA’s advice to not eat romaine lettuce. I’m a health nut that way.)

All joking aside, the health aspect is a big part of why the Walkers decided to open the business. The couple from Miami, Okla., had long known they wanted to get in the restaurant business, but they knew it needed to be the right type.

“We certainly considered the fast-food option, but we couldn’t stomach contributing to America’s obesity problem,” Aaron said. “This is something we can do and feel good about.”

Unlike some other smoothie franchises, the restaurant also will offer full meals. (Well, a smoothie can be a full meal, but I’m talking about one that also requires teeth.) The menu will feature toasted flatbread sandwiches, pressed sandwiches and several wraps and bowls. Aaron said some of the more popular menu items are likely to be a chicken pesto flatbread, several quesadilla options, and some signature chicken dishes such as Caribbean jerk chicken and Baja chicken.

Aaron said he hoped to open the store the week of Jan. 6, but in a sign of the tight labor market, he’s having difficulty getting all the positions filled, so the opening may push back to the week of Jan. 13.