‘Pet campus’ with day care, grooming and more could develop along Wakarusa Drive 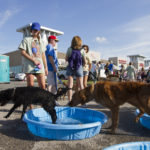 Dogs play in pools of water in this 2012 file photo of a special event held at Pawsh Wash near Bob Billings and Wakarusa Drive. Pawsh Wash is part of a plan for a proposed pet campus near 19th and Wakarusa in west Lawrence.

First I had to learn about the phrase “pet resort.” Now, it appears I need to learn about a “pet campus.” (Apparently it is not enough for my dog to have better vacations than me. He soon will have a better GPA, too.) Whatever the case, a pair of for-profit pet businesses are teaming up with a pair of nonprofit animal firms with hopes of building a pet campus along Wakarusa Drive.

Preliminary plans have been filed at City Hall for Home Sweet Home Dog Resort and Pawsh Wash to build new spaces at 1900 Wakarusa Drive. The new location would include space for a satellite location for the Lawrence Humane Society, and also would set aside ground for a unique nonprofit that aims to pair together people and dogs that are both in need of certain types of therapy.

“We are really keyed in on this idea of a pet campus,” said Anthony Barnett, owner of Home Sweet Home Dog Resort. “I do a lot of work in the nonprofit world, and for quite awhile I have had a concept to put complementary nonprofit and for-profit facilities together to serve pets.”

Barnett thinks he has found the spot to pull off the plan at 1900 Wakarusa. It is a large vacant lot on the west side of Wakarusa Drive, just south of the office complex that includes Wells Fargo Advisors and Family Medicine Associates. Some of you may remember the location as the site that had a sign saying it was the future home of a new Warren McElwain Mortuary. That project, however, never came to fruition.

Plans for the pet campus include:

“Our model will stay the same,” Barnett said. “We will just have newer and bigger space.”

• The Pawsh Wash pet grooming business would move from its current location at 1520 Wakarusa Drive to the new location just down the street. Co-owner Amber Nickel said the new facility would be about twice the size of the existing business. Some of the new space will be used for an education center where Pawsh Wash staff and other professionals can provide tips and advice on a variety of pet-related topics. Much of the space, though, will be used to make the business’s pet washing and grooming services more efficient.

“All the extra space will make the flow of clients with their dogs nicer and less stressful,” Nickel said.

• Barnett said plans currently call for space to be made available to the Lawrence Humane Society. Meghan Scheibe, interim executive director of the Lawrence Humane Society, said the space could be used as another site offering adoptions for dogs and cats. Currently, the humane society is completing a multimillion-dollar building project for its animal shelter on the eastern edge of Lawrence. Scheibe said having a place where people on the west side of town could easily interact with the humane society could be important.

“We are excited to explore the partnership location,” Scheibe said. “It is a really neat opportunity to consider because we have a very limited presence on that side of town.”

• Phase II of the project would include a new building for the nonprofit Symbiotic Behavioral Treatment Center. Barnett founded the nonprofit organization several years ago with the idea of taking dogs that have experienced some sort of trauma and are in need of therapy and teaming them up with people who could benefit from a therapy dog. Currently the organization has no building, and it does most of its work by taking therapy dogs to the VA hospital in Topeka for programs.

Barnett, though, has dreams of a $1 million facility that could be perhaps the first of its kind to serve as a laboratory for the idea that outcomes will improve if both the person and the canine are actively part of a therapy program.

“There is an intrinsic, satisfying thing for people to work with dogs,” Barnett said. “And when you are a team it can be even better. You know your dog is going through some stuff and they are there for you.”

Barnett hopes to win the necessary city planning approvals in the coming months, and break ground for the Home Sweet Home and Pawsh Wash location this spring, with a goal of being open by the end of 2019. He hopes the humane center space also would be part of the first phase of construction.

The Symbiotic Behavioral Treatment Center likely would require 24 to 36 months of fundraising and grant writing before it would be ready for construction, Barnett said.

The Wakarusa Drive project is just the latest in a string of pet businesses deciding to open in Lawrence. Earlier this year I reported that Woof’s Play Stay Grooming filed plans to locate in the vacant post office building at 1519 W. 23rd St. Also, I reported that Wagmore Canine Enrichment filed plans to triple its space by moving into the former ChaDa Sales building at 1735 Haskell Ave.

Barnett said he is not concerned that the market is about to become oversaturated with dog day care businesses. Instead, he thinks the market is finally starting to recognize that Lawrence has been underserved.

“You are seeing more of a market correction rather than an explosion,” Barnett said. “I’m still not sure that the market is fully served.”

Nickel, who is entering her 14th year with Pawsh Wash, said the pet business is seeing a surge in a lot of communities because pet ownership has undergone some dramatic changes in a fairly short period of time.

“It is a great industry to be in because people just continue to take better and better care of their pets,” Nickel said. “It amazes me that it has just been one generation difference from when dogs used to be in the back yard all the time, and now they are literally in our beds.”