Have an idea on what kind of businesses should come to downtown? There’s a text line for that; plus, an update on grocery store project 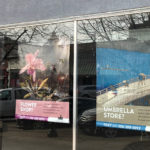 Downtown Lawrence Inc. has put up a series of banners in the window of the former Buckle store at 805 Massachusetts St. The vacant store is pictured Friday, Dec. 7, 2018.

A couple of months ago, I told you how Downtown Lawrence Inc. was looking for ideas on what new types of businesses ought to locate downtown. At that point, the organization hadn’t yet gotten a formal system set up to take your ideas, but it has one now.

The executive director of Downtown Lawrence Inc. tells me the ideas are starting to trickle in: an arcade, a grocery store, a bowling alley. Here is one other I’ll toss out: a combination grocery store/bowling alley. I know I won’t do any worse with a watermelon than a bowling ball.

Or, maybe not. You can submit a better idea of your own by texting 506-300-0093, which is a number for an online voting service that will record and tally the ideas.

Downtown Lawrence Inc. put up a series of banners in the window of the former Buckle store at 805 Massachusetts St. to promote the effort. That vacant building is a pretty good example of why Downtown Lawrence Inc. has started this effort. It is a large retail store in a prominent location, and it has been vacant for nearly two years after the Buckle decided to leave the Lawrence market in early 2017.

The banners in the window talk about how there is an “art to putting the right business in the right space.” The banners in the store window specifically are looking for suggestions on what would be a good fit for the old Buckle building. But if you have an idea that is more general than that, I’m sure Downtown Lawrence Inc. is interested in hearing it.

Sally Zogry, executive director of Downtown Lawrence Inc., previously told me that she’s hopeful area residents will give some real thought to what downtown Lawrence may be missing.

“We’re not asking people to tell us just what they want to see or what they think would be fun downtown,” Zogry told me in September. “What I really want to hear is what would they support with their dollars.”

This week, Zogry said the idea of a grocery store continues to be popular. As an alternative, several people have mentioned a midsize convenience store might be a good way to get such an idea started in downtown.

Of course, a local development group led by businessmen Doug Compton and Mike Treanor have been working to get a grocery store development off the ground at Seventh and New Hampshire streets for about three years.

The latest on that process is those conversations have gone well enough that the two sides are still talking, Bill Fleming, an attorney for the development group told me.

The grocery store project — which would involve tearing down the old Borders bookstore building and replacing it with a multistory building that would have apartments and the grocery store — was supposed to have a key hearing at last month’s Historic Resources Commission. The hearing, however, was delayed. Fleming said the fact that the development group and Checkers were still in discussions was the reason for the delay.

While the overall size of the building likely wouldn’t change to accommodate Checkers, some details related to the layout of the building could. Fleming said the group decided it would be best to work through some of those details before having a hearing at the HRC.

Fleming said he’s not sure whether the development group will be ready to have a hearing at the January HRC meeting or whether it might be a bit later.

“I still do think we’ll have a grocery store at some point, but we still have work to do on it,” Fleming said.

Fleming said he thinks the idea of getting suggestions from the public about what it wants to see in downtown can be instructive, but said it is only one small piece of the equation.

“We can take all the suggestions we want, but at some point we have to have somebody translate that into entrepreneurial zeal, and that isn’t easy,” he said.

But while we are throwing out ideas, Fleming — who works on a lot of downtown issues as part of a law practice — had an interesting one. Downtown could benefit from a few more national retailers.

“I think you need a few more of them to draw more people downtown, and then you want to surround them with eclectic mom and pop businesses that make downtown really unique,” Fleming said.

It will be interesting to see if members of the general public are thinking the same way.

In terms of how long Downtown Lawrence Inc. will be taking ideas, Zogry said it would run through at least the holidays.

A quick update on a couple of more vacancies to add to the list in downtown. For years there has been discussion that downtown has become too heavy with bar businesses; well, now two bars have closed. Tonic at 728 Massachusetts St. has a sign on its door and on its Facebook page saying it has closed.

The Jackpot Saloon at 943 Massachusetts St. also has a for-lease sign in its window.

The Tonic space will be interesting to keep an eye on. Plans previously had been filed by an Austin-based bar owner to do a major remodeling and open a bar called Logie’s. But I reported about that all the way back in February 2018. There have been signs that project has stalled, but I’m not sure. It does appear an Austin-based group owns the property now. The ownership group listed by the county doesn’t show up in the Kansas secretary of state’s business entity database search. However, the mailing address for the tax bill goes to an Austin-based property management and commercial real estate business.