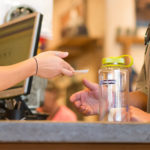 Lawrence City Hall officials recently received their July sales tax check, but because of delays in the sales tax process, the check represents taxes that largely were collected in May. Lawrence sales tax collections grew by only 0.1 percent compared with the same period a year ago. The numbers continued a trend that has developed this year: Local sales tax numbers have struggled to gain any momentum, and often have lagged behind other communities.

Although Lawrence sales for the month were basically stagnant, many area communities saw their sales tax collections take off with the unofficial start of the summer season. For example, Manhattan saw its sales tax increase by 7.7 percent from the same month a year ago. Topeka was up 8.7 percent, Overland Park 9.1 percent and Olathe up 6.6 percent. In fact, of the major retail communities in the state that we track, Lawrence was the only one that didn’t see a big jump for the month. The next lowest was Salina, which saw a 5.6 percent increase.

One-month sales tax totals, however, tend to be volatile, and it is easy to give them too much significance. Lawrence’s year-to-date totals look better but also show some signs of weakness.

With Lawrence having received seven of its 12 sales tax checks this year, collections are up by 1.3 percent for the year, compared with the same period a year ago. Although it is positive that Lawrence’s sales tax collections are still growing, they’re doing so at a significantly slower growth rate than in past years. In fact, Lawrence is on pace to have its slowest sales tax year in at least the last five years. Here’s a look at past growth rates:

The rest of the year will be interesting to watch. City Hall officials projected sales tax collections would increase by 2.3 percent in 2018. Consumers will have to pick up the pace quite a bit in the remaining months of 2018 to meet that projection.