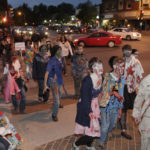 Lawrence may become a world record holder for zombies, and I’m not even talking about the hordes of college students who have to get up before noon. No, Lawrence’s popular Zombie Walk in downtown is getting a boost this year. The walk will be part of something called Hellaweenfest on Oct. 27.

Look for a downtown street to be closed, a local restaurant to be converted into a haunted house, an outdoor horror movie, and some version of a world-record attempt. The organizers of the festival are hoping to set a world record for the greatest number of people who are dressed up as zombies doing the “Thriller” dance.

If your 1980s brain didn’t get eaten by Charlie Sheen, you may remember the “Thriller” video that came out in 1983. The Michael Jackson video has a scene where a large group of zombies dance in unison to Jackson’s hit song.

Ryan Robinson — a Lawrence-based promoter who was part of The Color Run craze — came up with the idea of breaking a world record in this unique zombie category. As far as world records go, you may want to use your zombie brain and not overthink it. I don’t think Guinness World Records necessarily has a record for zombies doing the “Thriller” dance. It does have one for people in general doing the “Thriller” dance, and that is 13,597 people in Mexico City in 2009, according to the Guinness site. But, they maybe weren’t all wearing zombie costumes.

Robinson and others have done a little research, and the largest zombie dance they found was in 2009 when a group of more than 1,500 inmates in a Philippines prison donned zombie makeup and did the dance as part of their exercise routine to commemorate the death of Jackson. (When you have time on your hands . . . )

Robinson thinks Lawrence can beat that number by quite a bit and make the world record claim. There already are 2,000 people people signed up to participate in the Zombie Walk. Robinson thinks the event will draw 3,000 to 4,000 people. The walk had originally been scheduled for Oct. 12, but that date was changed to coincide with the “Thriller” event.

“Halloween has just gotten so big,” Robinson said. “There are a lot of weird people out there in the world.”

I’ll leave it to others to confirm the zombie record, but I can confirm this should be one of your five best opportunities to dress up like a zombie this year in Lawrence. Here are some details about the Oct. 27 event:

The block of Seventh Street between Massachusetts and New Hampshire street will be blocked off for a street festival. Inside the closed-off block will be a beer vendor, carnival games, face painters, food stands and other such items. The area will be free to enter, although there will be lots of merchandise and donation opportunities to support the Lawrence Humane Society and Headquarters Counseling Center. Gates open at 4 p.m..

Wake the Dead Breakfast Bar, 7 E. Seventh St., will convert itself into a haunted house for the event. Rachael Ulbrick, a co-owner of the restaurant, said organizers are close to signing a deal with one of the really large haunted house companies in Kansas City to come outfit the Lawrence restaurant. The haunted house will be free to enter, but will be accepting donations for the Humane Society, Ulbrick said.

The zombie action kicks into high gear at 6 p.m. (Well, zombies don’t really have a high gear, but you get what I mean.) Organizers are asking all zombies who want to participate in the dance to show up at Seventh and Massachusetts Street at 6 p.m. to learn the dance moves. Ulbrick plans to have an area cheerleading squad on hand to provide the appropriate instruction. The world record attempt will begin at 7 p.m.

The actual Zombie Walk — which is the 11th annual — will begin at 7:05 p.m. at Seventh and Mass. If you are a spur-of-the-moment zombie, that is no problem. Robinson said there will be several zombie stations near Seventh and Mass. People can make a small donation to the Humane Society, and volunteers will make sure you have on the appropriate zombie makeup.

About 10 p.m., Headquarters Counseling Center will show the classic “Rocky Horror Picture Show” on a big screen set up on Seventh Street. Ulbrick said plans call for a more kid-friendly film to be shown beforehand.

Robinson, who owns Lawrence-based Silverback Event Productions, said he’s excited to be involved with a Halloween-themed event in Lawrence. He said Lawrence’s Zombie Walk already is one of the largest in the Midwest. He thinks the community has a chance to use its popularity to create a weekend festival in the future.

“I think it could certainly pull in 5,000 to 10,000 people over a weekend, if it turned into something like that,” Robinson said. “Something as quirky and as unmistakable as a zombie fest would fit in well with the vibe of Lawrence.”