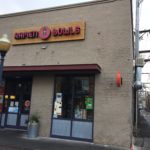 Add a fancy ramen noodle maker to the sights you soon will be able to see in downtown Lawrence. (Fancy ramen noodle maker? In college, I guess that meant I’d actually be wearing something other than my pajamas while boiling the water.) Now, I know it means something different, and it soon will be on display as a Lawrence noodle shop moves its business to Massachusetts Street.

Ramen Bowls has signed a deal to move from its longtime home at 125 E. 10th St. to a new location at 918 Massachusetts St. The restaurant is moving into the space that briefly was home to Harold’s, a restaurant that was trying to make its name by selling fried chicken, doughnuts and whiskey. (I think at least one of those three items also was part of my fancy ramen noodle recipe.)

Shantel Grace, a co-owner of Ramen Bowls, told me the restaurant is moving because it has outgrown its space on 10th Street.

“Our kitchen is less than 250 square feet currently,” Grace said. “What they work through is pretty crazy. We had so many customers who didn’t feel like they could come for lunch because they didn’t want to wait in line.”

The new restaurant will be about 3,000 square feet, or about double the restaurant’s current space.

In addition to more seating and a larger kitchen, the extra space will allow the restaurant to showcase a piece of equipment you don’t see every day: an authentic Japanese ramen noodle maker.

Ramen Bowls makes all of its noodles from scratch using a rather large stainless steel machine that cranks out about a thousand 5-ounce noodle servings every six hours. The restaurant currently has to rent a separate space to make its noodles. That will change, however, with the new restaurant.

“In the new space we will move the noodle maker out front so people can see what the process looks like,” Grace said.

The restaurant also will use the extra space to house a larger bar area. Grace said Ramen will partner with its sister company, Luckyberry Juice Cafe at 845 Massachusetts St. Grace is part of the ownership of that approximately 3-month old business. The bar at Ramen Bowls will use cold-pressed juices made at Luckyberry for specialty cocktails. Grace said she is working on a cocktail with dark rum, cold-pressed grapefruit and rosemary. Plus, she said the bar would have a variety of tiki cocktails that will use the Luckyberry juice.

The juice isn’t the first time the two businesses have partnered. Luckyberry has a soup bar that is stocked with soups that are made by the kitchen staff at Ramen Bowls, Grace said.

Ramen Bowl’s pending move from 10th Street, however, will end one cool idea: rooftop dining in downtown Lawrence. As we’ve reported, Ramen Bowls was working with its landlord on 10th Street — Lawrence businessman Jeff Shmalberg — to add a rooftop bar and dining area to the building.

But that idea was slow-moving, as it required a hefty amount of engineering work to win approval from City Hall. However, city planners were open to the idea, which maybe wouldn’t have been the case five or 10 years ago. Ramen Bowls and Shmalberg, though, hadn’t yet settled on a plan that was cost effective. Grace said Ramen Bowls won’t be trying to create a rooftop area at its new location.

“We were so excited about it, but the fear was that it would be pretty seasonal,” Grace said. “Logistically it was a bit more involved than we thought. We decided that the difficulty outweighed the cool factor. But I think somebody will do it, someday, and it will be a big hit when it happens.”

As for the pending move, Grace said she hopes Ramen Bowls will be operating in the new location in early December.

• While we are talking about restaurant news, add another one to the list that has closed after trying Lawrence for a fairly short time. Which Wich has closed its location at 2540 Iowa St., which is the strip mall next to Applebee’s. The restaurant, which opened in the summer of 2016, was a sub sandwich shop. Its calling card was the unique way you ordered your sandwich. You took an empty paper bag and a Sharpie and then started marking on the bag the various ingredients you wanted on your sandwich. I like my sandwiches really big, so I would give them one of those large paper yard waste bags. Maybe that is what scared them off.