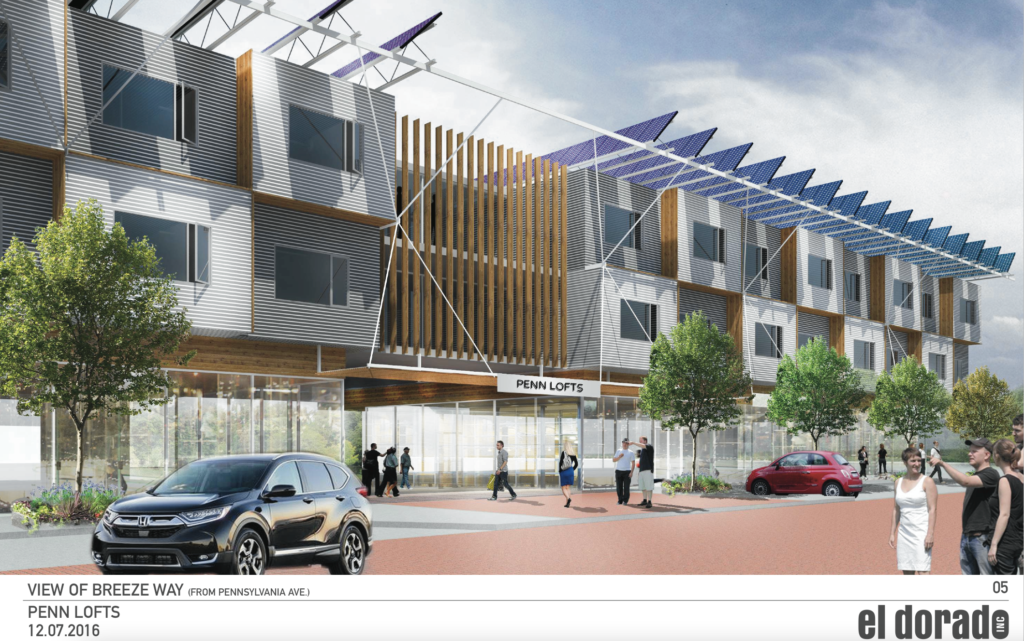 I always thought living in a warehouse district was cool, although that time my crate and I woke up in Cleveland wasn’t that great. Something tells me the living arrangements in East Lawrence’s popular Warehouse Arts District are quite a bit different. Regardless, there’s a new plan for many more apartments in Lawrence’s hip warehouse district.

A group led by Warehouse Arts District developer Tony Krsnich is in the early stages of securing financing for two new multistory apartment buildings that also would include commercial space for the area near Eighth and Pennsylvania streets.

City commissioners at their meeting tonight will be asked to get the process going. Krsnich is seeking a resolution of support from the commission that he can use as part of an application for affordable housing income tax credits from the state of Kansas. Krsnich — as he he did with the Poehler Lofts project and others — hopes to use to the tax credits to help finance the construction of two new apartment/retail buildings. Here’s a look at the two buildings he has on the drawing board:

• Penn Lofts would be located on a vacant lot at the southwest corner of Eighth and Pennsylvania streets. It would be a three-story building with about 70 apartments, with a mix of studio, one-bedroom, and some two- and three-bedroom units. About three-quarters of the apartments would be enrolled in the state’s rent control program, which would require that they be offered at below-market rates to people who are at or below 60 percent of the average median income in the county. The ground floor could include as much 12,000 square feet of commercial space, and Krsnich said plans currently call for seven work-live units to be located on the ground floor, meaning there could be space for someone to own a shop and live in the building too.

• Delaware Coop would be located on a vacant lot at the northwest corner of Ninth and Delaware streets. It would have 15 apartments, and 13 of them would be enrolled in the state’s rent control program. The two and a half story building would include a mix of two- and three-bedroom units, and also could include some work-live units. The ground floor is expected to have about 2,300 square feet of commercial space.

Krsnich has long said he doesn’t like the idea of building new buildings that look old, so look for these two structures to have distinctive architecture.

“They will be period appropriate,” Krsnich said. “People 100 years from now will look back and say that is really interesting architecture and engineering.”

Krsnich said the buildings will make extensive use of solar panels and they will be incorporated into the aesthetic of the building. Here’s a look at a few concept plans that have been designed by el dorado inc., the Kansas City architecture firm that Krsnich has used on other projects. 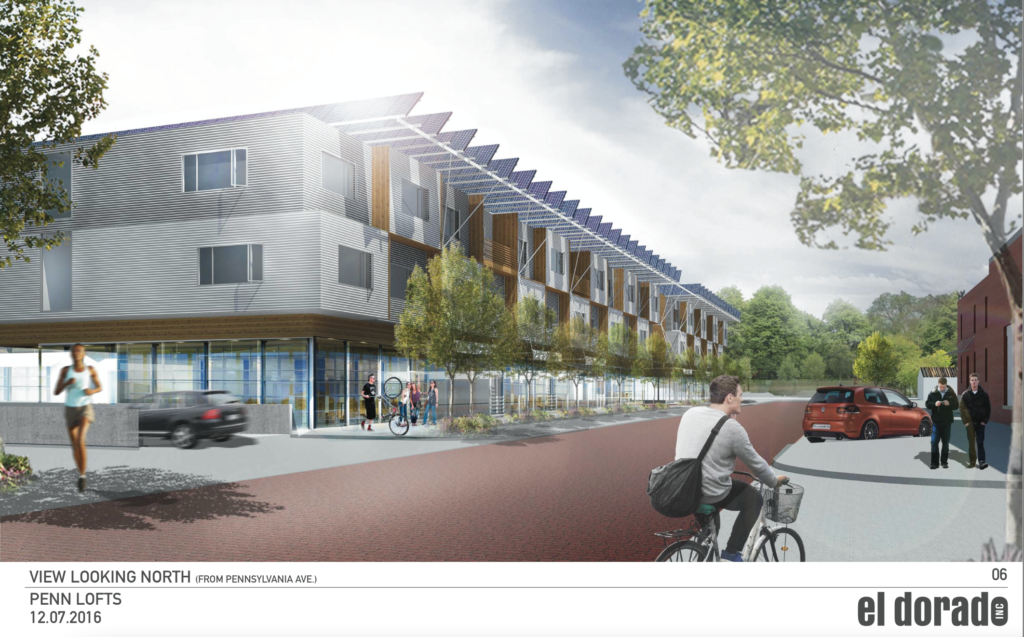 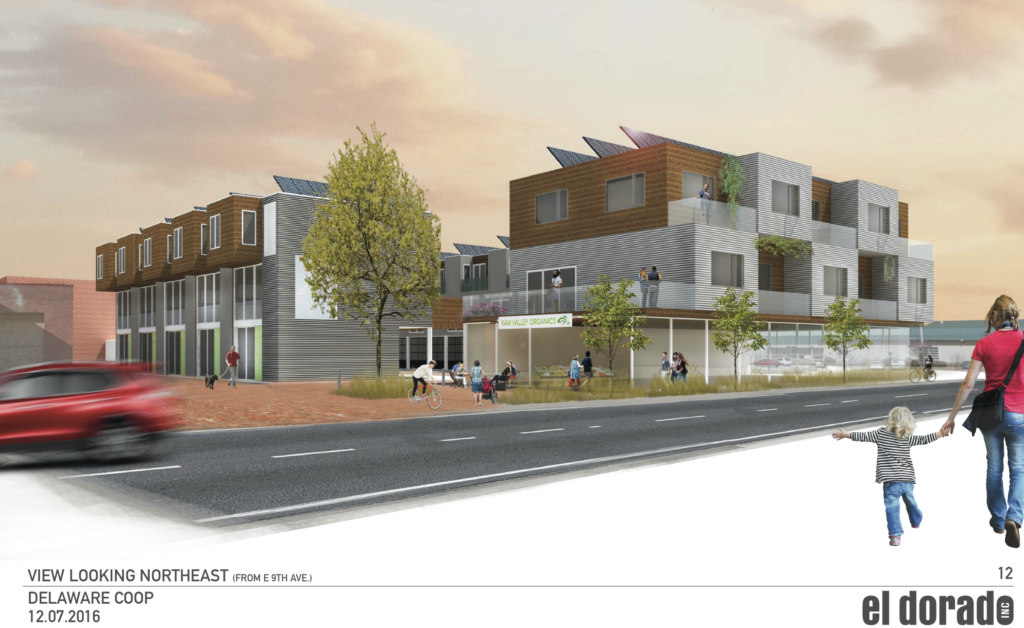 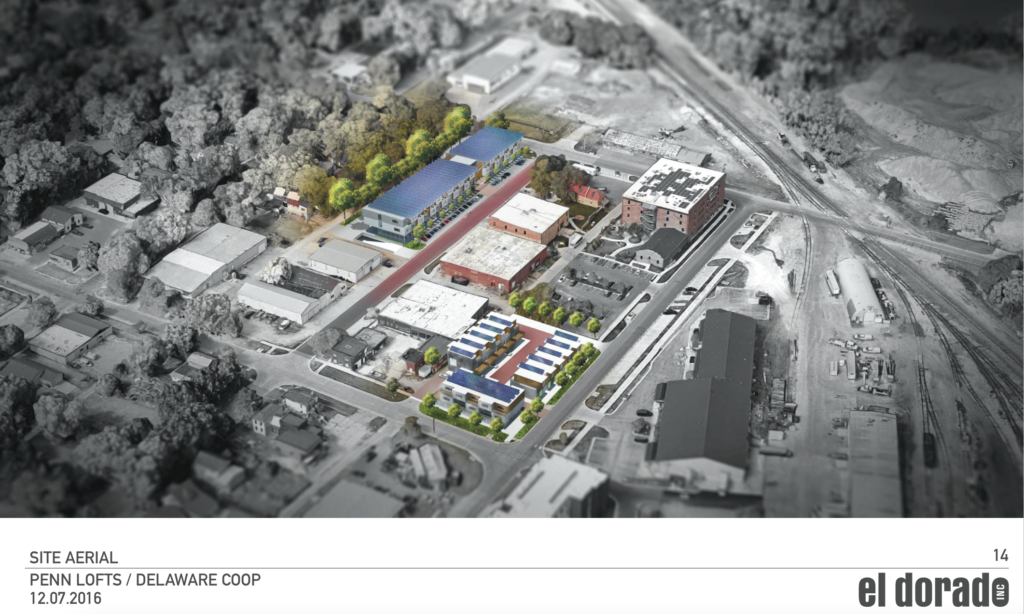 “We probably have 250 people on a waiting list trying to get a rental in the Warehouse Arts District,” Krsnich said. “People want to live and work in the area … there are lots of small business owners and entrepreneurs who want to be part of the greater downtown area.”

The tax credits, however, will be a critical part of the project. Krsnich said he’ll hear from the Kansas Housing Resource Corp. in May whether the projects have been awarded the tax credits. If awarded, construction would begin by the end of 2017, and the projects could be open in the fall of 2018.

Krsnich said he will seek some city incentives too. The main incentive would be a request for a 95 percent, 15-year property tax rebate through the city’s Neighborhood Revitalization Program. Krsnich has received similar incentives for his other projects in the Warehouse Arts District.

Krsnich has envisioned asking for a larger incentive package that would have allowed him to build underground parking for the new projects. But he said his read of City Hall is that such a request would not be met favorably. Instead, he’s building some surface parking into the projects, and he plans to convert a gravel parking lot just east of the Poehler Lofts building into a paved parking lot that can serve as overflow parking for the new apartments and for other uses in the district.

These two projects may help the district grow its number of uses. The two apartments will be a bit different from Krsnich’s other projects because they will include commercial space on the ground floor. Krsnich said he didn’t know yet what to expect on that front. He said some of the space could be retail, but he also noted that demand for office space in the district is high. The district houses architects, engineers, attorneys and other professionals in some of the smaller warehouse space along Pennsylvania Street. Of course, the district also has a strong art gallery presence, and that could grow too.

“I’ll leave those details up to the market,” Krsnich said. “I want to build the space and begin conversations with people about it.”

Krsnich said the market has thus far produced some great results for the district. Krsnich first became involved in the area about five years ago when he decided to renovate the then-dilapidated Poehler Grocery Warehouse building into loft-style apartments through the state’s affordable housing program.

As that project became successful, Krsnich’s company began acquiring other old warehouse buildings along Pennsylvania Street and converted those into various uses, including office space, the Cider Gallery and the recently opened Bon Bon bistro.

“I think this district is a lot about the cool factor and the potential of Lawrence,” Krsnich said. “It is important to understand the idea of smart growth and talent-driven growth. That’s what is happening here. I have just tried to get out of the way of it. It has taken on a life of its own, and it has exceeded any of my expectations.”

Update: Commissioners approved the resolution of support at their meeting Tuesday. The resolution was removed from the commission’s consent agenda, and passed on a 4-1 vote. Mayor Leslie Soden voted against the resolution, but only on procedural grounds. She said she thought the process should be examined to determine whether the city’s Affordable Housing Advisory Board should first review such requests.

The resolution of support does not give the projects all the approvals they would need from City Hall. The projects would require proper land use approvals, and the City Commission would have to approve any tax rebates or other incentive requests. 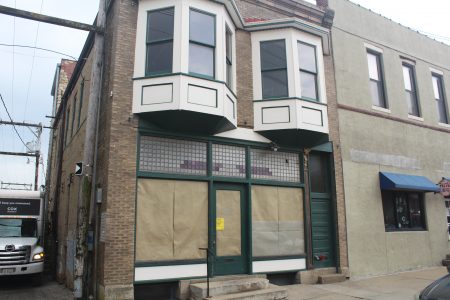 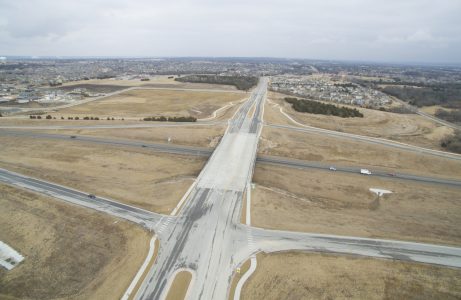