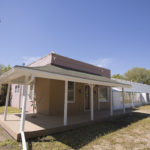 The former Sunrise Garden Center site, at 15th and Learnard in East Lawrence, is pictured on Thursday, April 27, 2017.

You know it is a good time of year when there is talk of needing a wagon to hold all the food. That’s the case in East Lawrence right now. Plans have been filed to allow an old-fashioned produce wagon to set up shop in the neighborhood.

The folks at One Heart Farm have filed plans at City Hall to install a food wagon, canopy and other minor structures on the site of the former Sunrise Garden center at 15th and Learnard in East Lawrence. Tomatoes, corn, melons, greens and herbs will be mainstays at the wagon, said Chris Black, who owns the business along with local farmer Pete Flory. Fresh flowers also are expected to be a regular offering.

One Heart Farm sells a good amount of produce to the Lawrence grocery store Checkers and a few other outlets. But currently, it doesn’t have a retail outlet of its own. Plans are to keep this venture simple, Black said.

“It basically will be an open-air trailer with an awning,” Black said. “It is a wagon with produce.”

But, because the wagon will draw more traffic to the site and such, it technically must be approved by Lawrence planning officials before it can operate. But it is considered a minor improvement to the site, which means it goes through an expedited approval process. Black said the wagon hasn’t yet won approval, but he’s hopeful everything will be approved in time for the business to be in operation by Mother’s Day. Black said the wagon likely will be open three to four days a week with evening and weekend hours.

The farm grows a lot of its produce in old greenhouses that exist on the former Sunrise Garden Center site. It also has farmland near Lone Star Lake. The farmers have been spending a lot of time renovating the small greenhouses that had been vacant for a few years.

Black thinks that getting people to the old Sunrise site will be a positive because it shows that agriculture doesn’t have to be just for rural areas.

“We’re trying to demonstrate how successful urban agriculture can be,” Black said.

As for how successful this year’s crop of produce will be, Black said it looks promising thus far.

“We need it to be a good year for produce, that’s for sure,” Black said. “This is only our second year trying to do this as a full-time business. You learn something new about farming every day, but it has been great.”

• Look for more activity on the former Sunrise site in the near future. I chatted briefly with David Millstein, who leads the group that bought the property more than a year ago. He said several projects are in various stages.

“It is all rounding into a finalized state, at least philosophically,” Millstein said.

• The nonprofit group the Sunrise Project is making progress on the rehabilitation of the old storefront that used to serve the Sunrise Garden Center. That space will give the nonprofit kitchen and indoor classroom space, Millstein said. The nonprofit aims to educate youths and others on how to grow, process and sell food. Millstein said the indoor space could be completed in about two months. The nonprofit already operates an outdoor garden at the site and hosts events there, like an organic plant sale from 1 p.m. to 4 p.m. on May 6.

• Millstein hopes to start construction on a small manufacturing plant for his family’s tofu business. As we previously have reported, Millstein operates Central Soy Foods, a small company that produces about 2,000 pounds of tofu and tempeh that is sold in grocery stores in Lawrence and Kansas City. The company needs better manufacturing space, and Millstein is close to getting final approvals needed to build on the Sunrise site. He plans to build about 2,800 square foot building just south of the main greenhouse building on the site. He hopes to start in about a month and complete construction by the beginning of 2018.

• A for-profit company called Lawrence Organics occupies about 6,000 square feet of the approximately 30,000 square feet greenhouse complex on the property. The company grows a variety of greens that it primarily sells to restaurants and other larger buyers. Millstein said he is reserving the rest of the large greenhouse area to accommodate future growth of the organic company.

“Growers are pretty finicky about their processes, so I don’t think we want too many of them in there at once,” Millstein said.

• As we have previously reported, Seeds from Italy also has set up shop at the location. The Lawrence business imports a variety of seeds from Italy and sells them across the country through an online catalog.